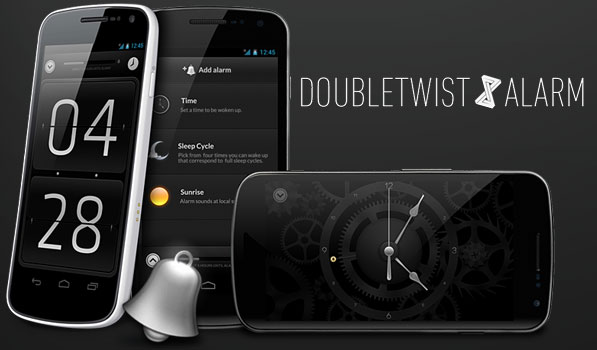 By Preshit Deorukhkar on 30th March '12 in Android

The Most Beautiful Alarm Clock App for Android

Unlike iOS, there are only a few developers that have churned out beautifully designed apps for the Android platform. doubleTwist is one such company, who launched ‘doubleTwist Player*’ — a beautiful music player app for Android on the Google Market a few years ago. Well, they’re at it again with the launch of their second app today, which is quite possibly the most beautiful alarm clock app for Android.

Designed by Sebastiaan de With — one of the best designers we’ve had the privilege of speaking to, the doubleTwist Alarm Clock features some exceptional pixel love. The app features a gorgeous analog clock face, along with an equally beautiful flip clock. The app even works with doubleTwist Player, so you can set your own wake up tune from the library.

doubleTwist Alarm Clock also features two alarm modes — Time or Sleep Cycle, the latter helping you pick optimal wake-up times correcponding with your sleep cycles. Of course, the app does carry the regular set of features you’d expect an alarm clock app to have. doubleTwist Alarm Clock is available on Google Play for just a dollar, so if you’re one of our few readers who own an Android device, go right ahead and grab it.

*We’ve long wanted to feature doubleTwist Player on the site, but they’ve never responded to our emails or tweets for some reason.

Paper — Bring out the Creative Genius in You