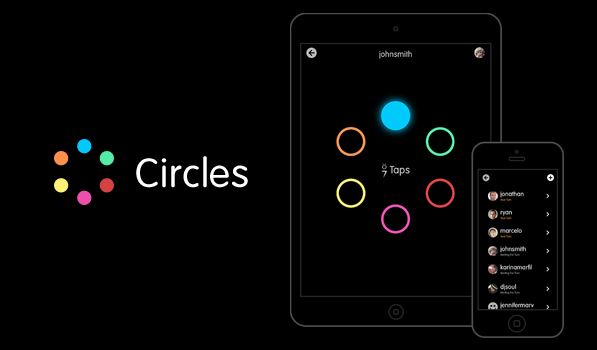 By Mikhail Madnani on 25th April '13 in Game

Circles Is an Elegant and Minimal Memory Game

Circles looks beyond great. It has sounds for everything, which I love. The game relies on light colours and white text on a black background. I was surprised to not see any theme options. The game is a memory game involving coloured circles and tapping them in a correct order. The gameplay is divided into four main modes. The first mode is the practice mode that allows you to choose the circles you want to play with and everything from the animation of the circles appearing from the middle of the screen to the sounds and congratulations messages that appear on successfully tapping the pattern make the experience great. If you fail to identify the pattern correctly in practice mode, there are some hilarious messages with pop culture references. The second mode involves different sets of levels with the number of circles increasing as you go ahead. The top score section gives you four difficulty choices ranging from easy to alien to test your mental might against the top score worldwide. Multiplayer lets you play turn based against an opponent through Game Center. The game has weapons that you can use in multiplayer mode that can be bought using coins that you unlock. If you don’t have enough coins you can even use in app purchases to buy more coins and as much as I hate in app purchases in games, the implementation here is nice and at no point does the game force you to part with money. You can also use coins to buy chances that give you a second chance in any level of the game.

The ambient music in the game coupled with the Letterpress-esque sounds and beautiful visuals made me love this game. Circles by Snowman is by far the best looking memory game out there. Although, I did experience 2 crashes over the last few days while playing. A percentage of each sale will be donated to help fund Alzheimer’s research and support programs as well. If you’re a fan of Letterpress and enjoy memory games, this one is a no brainer. Circles is available in the App Store as a Universal game for $1.99.

Horizon for iOS Gets a Solid 2.0 Update