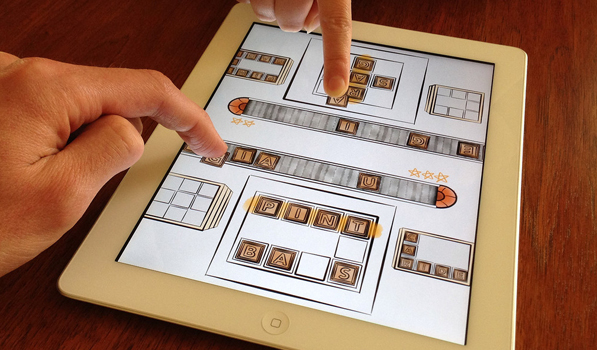 I love great looking word games as can be seen from the many featured in the games category. Paper by 53 has been on my iPad homescreen since the day it released. It is by far one of the best apps out there. I discovered Coolson’s Artisinal Chocolate Alphabet (I still can’t get over the name) from an RT by Matt Gemmell. After checking out the website, I was pretty amazed that most of the game design and artwork was created in Paper.

The game can be played in two ways. The whimsy way has a nice story narrative that you see as you progress and the non whimsy way just gives you a nice and simple word game to play with no real distraction. When you start the game you see Coolson’s factory all done in Paper with animations and a nice and catchy tune. I really love the use of the nicely drawn graphics with the quirky sounds. Your main aim is to fill up boxes with chocolates that have alphabets (hence the name) and make sure none of the chocolates go into the trash. Like most mobile games, the aim is to get 3 stars in each level. Levels are divided into days on the calendar. There are three months to play through with weekends not included. Almost everything on each screen is tappable and I urge you to play around with the different objects on every screen. The gameplay does get quite difficult as you progress because just like in Scrabble, using tiles or chocolates in this case to form words across a row and column in a box gets to you. The game also has support for Game Center and a nifty battle mode that can be played with someone locally or over the internet through Game Center. The local battle mode is a lot of fun and the game doesn’t look bad like most other games do with a split screen.

I’ve praised the game a lot and there’s only one small thing that really annoys me about it. The app icon doesn’t fit the rest of the game at all. I hope it is fixed or changed to anything but the current one in an update. Coolson’s Artisinal Chocolate Alphabet is available for free on the App Store with an in app purchase to unlock the complete game. There is also a premium version with no limitations available for $3.99 right now.

Agenda Calendar 4.0 Is a Slick Addition to Your iPhone Workflow