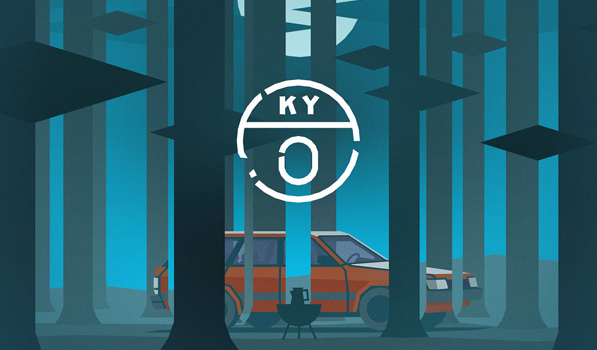 I’ve been discovering a plethora of great games recently and just like everyone else, I bought way too many games during the Steam sale last week. Out of all the games bought and seen during the sale, one game was left out: Kentucky Route Zero. I only got to know about the game when Nathan posted about voting for it during the sale. After doing a bit of research and watching a few videos I was more or less sold on the game. The only stopping me from going in was the fact that the game is split up into chapters and that means playing it part by part and having to wait.

Kentucky Route Zero (Henceforth KYZ) reminds me of #sworcery a lot. Both games involve you exploring and are point and click adventures. Both also have amazing visuals. KYZ has a very interesting way of telling you the story. As you play it, all communication is done in text format and you get to pick what each person says in many cases and with each choice, more of the story is revealed. There are a whole bunch of visual cues indicating what you can interact with like an eye indicating you can inspect (in text). The story progresses and you find conversing with yourself from the other person’s perspective many times. You control Conway for the most part who is a truck driver and are delivering an antique to 5 Dogwood Drive. I’m going to avoid going into details about the story because almost everything will be a spoiler and the story needs to be experienced untarnished. In fact I went in without even bothering with reviews or even videos barring a 1 minute gameplay clip on YouTube.

As of this writing, two acts are available. Act 1 is the intro where you, Conway, arrive at the Equus Oils station and meet an old man who asks you to fix something in his station. You explore the station and the basement and some of the stuff you find is just plain creepy. You run into more people and some even join your party along with your trusty and old dog, Homer. The visuals and gameplay in some scenes in Act I reminded me a lot of the game Windosill. If you can interact with something, remember to do so while the scene progresses because more of the story is revealed with every small thing you do. The visuals are stunning. Every scene deserves to be made into wallpapers and high quality posters. Travelling from one scene to another is accomplished in a very old school text game based look with your truck being represented as a wheel moving along a thin line on a monochromatic and simple map. Act II brings in more questions than answers and the story really gets into its own here. I did however get really annoyed in the map mode in Act II because traversing one part was really confusing and I spent like 15 minutes just wandering around nothingness in circles. The music in Act II is more memorable with a certain tune still stuck in my head hours after completion.

KYZ is full of surprises and you remain engrossed. The small details like in game text going hazy when it rains simulating an old television set and how the position the character moves to when you click is indicated by a horseshoe being thrown on a small pole in the ground, are things I really enjoy seeing. KYZ is an experience and right now only two out of five parts are available. A purchase gets you all five parts and they will be delivered to you as soon as they are released. KYZ is available for $25 on Steam and directly from the developers, Cardboard Computer, here. The direct version has a DRM free version and a Steam key for the game and that is the version I recommend getting. The game works on Windows, Mac and Linux.

Landcam is a Fantastic All-In-One Camera App for iPhone