By Beautiful Pixels on 22nd December '14 in The Highlight

2014 was a phenomenal year for iOS apps. At WWDC ’14, Apple announced a a variety of different new APIs that developers could use to enhance their apps, most of which we never thought would be possible on a closed platform that is iOS. Once iOS 8 was released to the public, we saw some amazing new apps & updates being released on the App Store. This year, to start off our annual ‘The Highlight‘ series of posts, we’re bringing you our picks of the Best iOS 8 Feature Additions in apps. Make sure your subscribe to us via our RSS, Twitter or Facebook feeds so that you don’t miss out on the posts from The Highlight 2014. 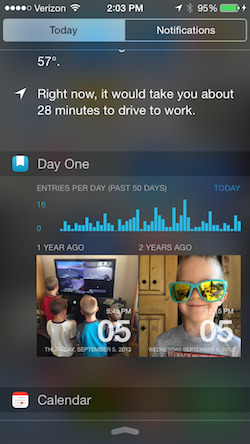 Day One for iOS is by far the best journaling app out there. Its extensive feature-set and the companion Mac app collectively make it the best journaling suite for Mac & iOS platforms. The developers have been consistently adding features and improving the experience and the Mac app even won an Apple Design Award at WWDC ’14. After the release of iOS 8, Day One v1.15 brought two stellar new features to the app. The app now comes with a configuratble Today Widget in the Notification Center that displays a graph of your recently entries as well as a feed of your photos from the past. Additionally, it also makes a Share Extension available that lets you send & save photos and other content directly from other apps into Day One. We’ve sung praises for Day One many times in the past and it’s easily one of our favorite apps on iOS. The Universal app is currently on sale for just $0.99.

Banca was one of the first apps that I tried with an iOS 8 specific feature that really blew my mind. Banca 6.0 introduced a Today Widget in the Notification Center on iOS 8 that automatically converts a currency value copied to the clipboard. This is great when you want to quickly convert the prices of products or services to your local currency when you are browsing ecommerce websites. Banca has consistently been an amazing currency converter for iOS along with its sister app Unitica that helps you convert a wide range of units. If you haven’t already tried Banca on your iOS device, why the wait? It’s a Unviersal app and currently on sale for just $0.99. 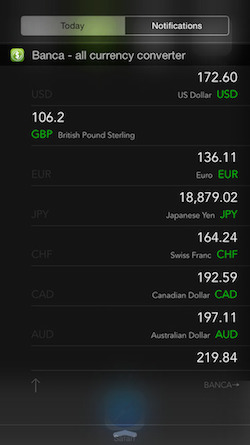 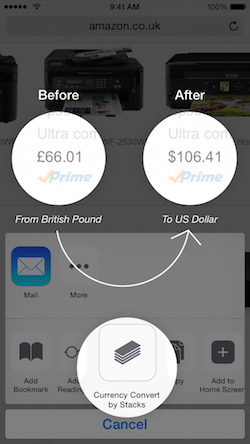 Stacks, another currency converter for iOS also managed to leave us with our jaw on the floor with its iOS 8 share extension. Stacks version 2.0 that was released a few weeks ago introduced this fantastic new feature which lets you directly convert all the currencies listed on a webpage in Safari via the Stacks share extension. Next time you’re browsing sites like Amazon, NewEgg or pretty much any other site that has a bunch of products listed with varying pricing, Banca’s approach may not be the best approach. Stacks here works its magic right away on all the prices in one go. Simply choose the from & to currencies and you should be good to go. Stacks is available as a Universal app for just $2.99.

Evernote’s iOS app was one of the first apps to be updated with a pretty nifty Today Widget for the Notification Center in iOS 8. The widget sports some beautiful glyphs that let you add various kinds of notes to your notebook from anywhere on iOS. It manages to look minimal, all while sporting the Evernote colors and font style. Evernote for iOS also has a Share Extension that puts the native iOS share sheet to shame with its look and design. Evernote is available as a Universal app for Free on the App Store. 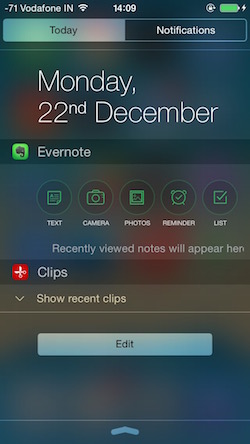 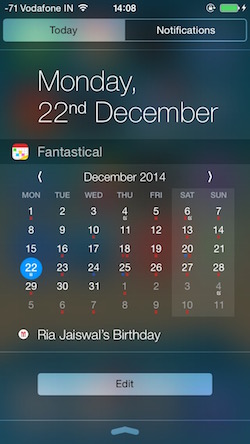 It often feels like we talk about Fantastical all the time. Flexibits keeps making the apps better and improving on an already phenomenal piece of software. With iOS 8, Fantastical got updated and gained a stunning Today Widget and a Share Extension. The widget is a great window into your schedule. It looks great and works brilliantly well. Fantastical was already a phenomenal calendar app for iOS and with these iOS 8 additions, the app has only gotten better. It is available for iPhone for just $2.99 and for iPad at just $6.99. on the App Store.

Junecloud outdid themselves in 2014 with not only a fantastic update to Deliveries on iOS 8, but also the release of a stunning Mac app crafted with OS X Yosemite in mind. The iOS app got supercharged for iOS 8 thanks to the introduction of a Today Widget as well as a Share extension to add your deliveries directly to the app. Deliveries’ widget has great typography and has your package delivery status visible at all times in the Notification Center. These two feature additions make opening the app redundant for the most part. Deliveries is one of the most essential apps available on iOS and OS X. Deliveries for iOS is available on the App Store as a Universal app for $2.99. 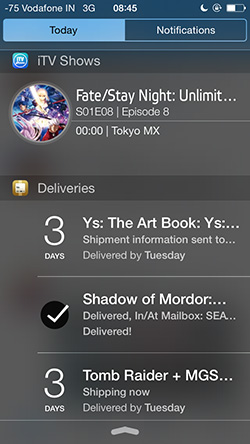 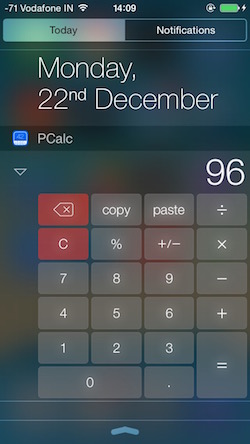 PCalc is easily the best calculator app suite for iOS and OS X. On iOS 8, PCalc has a Today Widget that is a fully functional calculator on its own. On large screen devices, it has a scientific calculator layout and the widget looks really good. There’s a nifty option to collapse it as well, so it doesn’t take up too much space when you don’t need it. PCalc remains one of the best apps available today with continuous support through updates. PCalc is available on the App Store as a Universal app for $6.99. There is also a lite version with limited functionality available for Free on the App Store.

1Password on iOS 8 is probably one of the most important and essential apps ever. It drastically reduces the barrier of entry into better online security and works wonderfully on iOS. 1Password utilizes Touch ID for authentication, which means no more worrying about unlocking the app in public. The Safari Share Extension allows functionality we only saw on desktop browsers, come to iOS. Logging into websites is a just few taps away now. There’s even an app extension sdk available for third party apps. 1Password for iOS 8 is available as a Universal app for free on the App Store. There’s no excuse for sloppy passwords anymore. 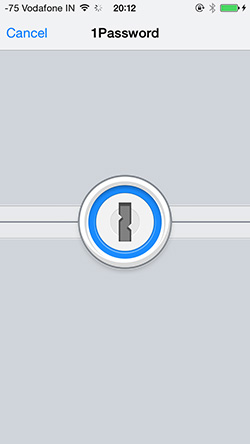 Clips is quite possibly one of the most powerful apps on iOS right now. It puts all other clipboard managers to shame and still does so much more. Our favorite feature of Clips is its Today Widget. It syncs your clips across all your iOS devices, thanks to iCloud. The widget isn’t just a dumb list like the Dropbox one. Your clips are actionable and can be copied in a few ways. Clips showcases what is possible now that Apple has started opening up a bit on the iOS front. Clips is available for Free on the App Store with an IAP that unlocks syncing and a few other features.

iOS 8 has made some tremendous new features possible in apps and app developers are pushing the boundaries of what is possible in their apps. 2015 is going to be an exciting year for us as well as you, the consumers.

We have some exciting new posts lined up this week, so make sure you’re subscribed to our RSS, Twitter or Facebook feeds. The Highlight 2014 is made possible by the love & feedback of the loyal readers of Beautiful Pixels. We thank you for your support.