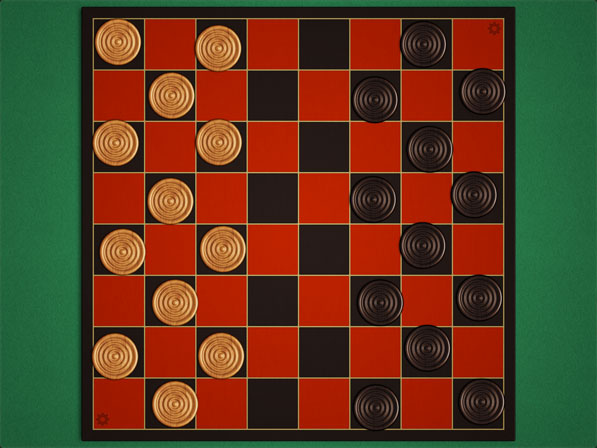 By Mikhail Madnani on 10th August '12 in iPad

The iPad has become the quintessential replacement for the board games today. Apps like Scrabble allow you to use the iPad screen as the board with iPod touches or iPhones as tile racks connected over the network or bluetooth. We have seen many boardgames make their way to iOS in the last few years but most of them are either too complicated or just not executed well on a touch screen. Board games have always been about playing with someone else and the ones seen today encourage solo play or playing over the internet with an unknown person. This is where Pacific Helm comes in. The trio of Louis Mantia, Brad Ellis, and Jessie Char who are well known in the design community for their iconic work now present us with their own take on checkers for the iPad, Checkers – 2 Players.

Checkers – 2 Players is all about simplicity, beauty, and the core concept of a board game which is interacting with someone else. The game is a virtual checkers box for your iPad and as the name states, it needs 2 people to play. There is no AI or single player mode or even any Game Center integration. You are presented with an excellent instructions page after launching the app that explains the rules in short. I cannot emphasize how much effort has gone into the subtleties of the pieces and the board design here. There are 8 colour choices for pieces including a natural wood finish which is my personal favourite and 4 board options. Every little thing like changing the piece colours has its own nice animation. The board designs here are very reminiscent of those expensive boards with custom engraving that were way too expensive at the stores. Gameplay is just like the real thing and while you have to move every piece individually, the game will not let you place a piece on a light coloured square. When a piece reaches the other side, a tap on it converts it into a king piece which is insanely great looking. A new game can be initiated by tapping the options button and clicking new game which then confirms the same with the opponent on the other side. The app website is also worth checking out. They have a very nice slide to download button that functions like the iOS lock screen and it takes you to the App Store.

Overall Checkers – 2 Players is everything a board game on the iPad should be but it has its flaws. For one there are no sounds in the game. Sounds are essential to complete the experience and I was expecting sounds while playing. The price is a little steep as well. $4.99 is much higher than the average price for a game on the App Store let alone one that has no single player mode. That said, I haven’t seen a better core board game experience on the iPad till date. I hope this is the first of many apps and games we can expect from Pacific Helm. Checkers – 2 Players is available on the App Store for $5 and it is worth checking out for its looks if not gameplay.