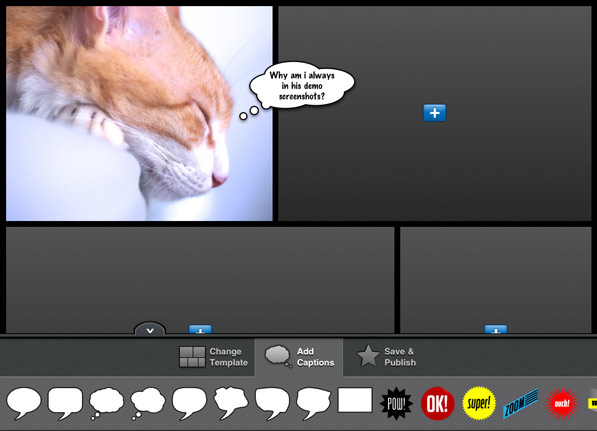 By Milind Alvares on 26th November '10 in iPad, iPhone

I love it when app developers spend time on UX design instead of pursuing the obvious approach. I reviewed ComicStrip for SA, and if you ever feel the need to share single non-contextual images on your social networks, this is the perfect app for the job.

Not only does ComicStrip sport a very smart coat of pixel paint, there’s a lot of thoughtful UX design that’s evident as you use the app. For instance, when you launch the app, there isn’t any template choosing whatsoever, you’re all set to create your first comic strip. The plus buttons imply that you need to add images, and the clearly visible tab at the bottom is evidence that there is more UI than is visible. I’ve used a bunch of other comic strip apps, and they all come across as cluttered and at all times want to show you their wares — “Look at these 300 types of thought bubbles you can use!”. The team at Sketch & Scotch (I believe Mike Bernardo of Green Volcano Software was the one who executed their ideas) have really done a sweet job providing a friction free experience.

There is however one interesting issue with this app, and that is to do with the intuitive UI not being properly understood by its users. Sometimes the human brain just sees past things that are just plain obvious. In my review, I complained that it’s no possible to move the tail of a speech bubble. I even suggested that the best UI for that would be to just make the tail draggable, without any additional edit mode. As it turns out, that is exactly the feature already present in the app, and I somehow missed it. I missed it because there’s visual indication that the tail is draggable, so you have to actually drag it to find out. And it’s not just me, it appears a lot of app store reviews speak of the same ‘problem’. It’s like not knowing what an eraser does until you actually rub it over some pencil markings.

The team itself seems to be flummoxed by this occurrence, and the release notes of their latest update mentions “Tips” to move the tail, rotate images, and delete tiles — release notes is not the place for tips and tricks.

Maybe I’m making a big deal out of nothing. I mean, now that you know, you’re going to have no difficulty moving that tail around. It’s a great looking app to have on your iPhone or iPad, and for just $1.99 is well worth it (they’re selling it for $0.99 during thanksgiving).

What Cocktail? — Mouth-Watering Shots of Alcohol