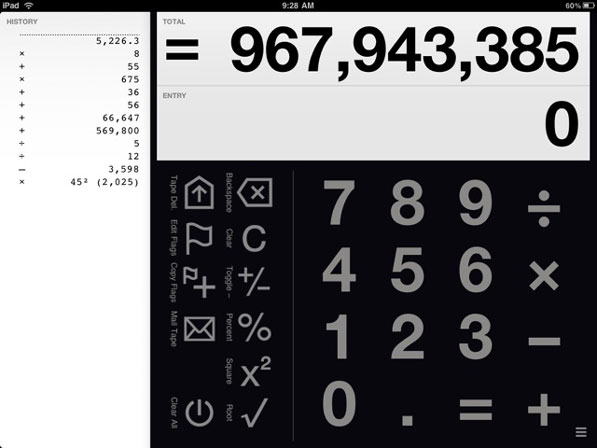 Digits Calculator for iPad – A Fresh Take on Mathematics

The iPad doesn’t come with its own calculator. No one knows why Apple hasn’t included one; perhaps it’s because the App Store is so good at providing just the right calculator for each one’s need. Digits Calculator isn’t your average small calculator blown up to insane proportions. At least not without bringing something more to the table.

Digits’ overall look is extremely flat and looks just right on the iPad. There isn’t any shadow worth the mention, and even the digits aren’t separated by borders. The numbers are large and tappable, and it displays the current entry as well as the total in two fields above. There’s a math tape on the side, which you can share via email once you’re done with the calculations. In terms of UI, Digits takes some bold (maybe even questionable) steps. In landscape, the labels for special functions are displayed sideways. Surprisingly, this doesn’t affect readability, and makes much better use of whitespace. When flipping the device, the text labels stand upright, numbers elegantly swoosh down, all in span of half a second. Digits installs with a hideous yellow colour, which thankfully one can adjust using the hue/saturation settings. Weirdly, one gets to the settings by tapping an odd button comprised of three horizontal lines, instead of the standard ‘i’ button. My only complaint is its bright yellow icon that makes a small mess on the home screen.

As is apparent from that screenshot, I’m not a very proficient mathematician, and I don’t know all that a calculator is required to do. Professionals have already chosen PCalc, and it seems to be be a very powerful calculator; just too powerful for me. It’s also very likely that a better calculator will show up on the App Store, and I will rave about it, but as of right now, Digits does it for me. $0.99 at the App Store.

Sally Park – This Car Finder might look better than your Car

Instapaper on the iPad. Words escape me.