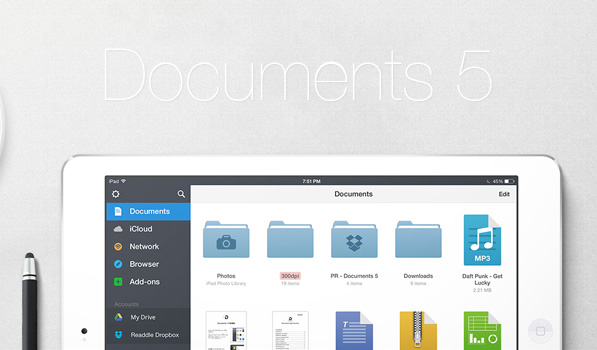 By Preshit Deorukhkar on 28th February '14 in iPad, iPhone

Readdle have released an absolute gigantic update to their fantastic iOS App — Documents. Documents 5 incorporates a plethora of new features with this release, making it a highly recommended app from Beautiful Pixels. Unlike most other apps that, in an attempt of using the iOS 7 design style, almost always go “flat & white” with their UI, Readdle has done a stellar job of coming up with an elegant, clean & surreal design. There’s some brilliant use of colors, which makes the UI stand out from the rest.

Documents 5 isn’t just a design update though. There are some terrific features included in this release though. Most notably, the app now comes with an all new file manager that works with your PDF files. This new file manager lets you drag & drop your files anywhere, making the task of organizing your files as easy as sliding your fingers on the screen. Your most frequently used files can be marked as favorite, making them easily accessible when you need them. Taking cues (or directly lifting them) from Mac OS X, you can now assign colored tags to your files making organization easier. Documents 5 also supports background downloads, so your files from online services can be ready and waiting for you.

Another notable addition in Documents 5 is the new “Add-ons” feature. The app can now integrate with other apps and extend its capabilities. Currently available only on the iPad, Documents 5 interacts with PDF Expert, Scanner Pro, Printer Pro and PDF Converter. Documents 5 is a Universal App and available Free on the App Store. Take a moment to read Readdle’s goal of building an interconnected ecosystem of iOS apps.

The Side: Hangouts 2.0 for iOS

The Side: Weekend Read