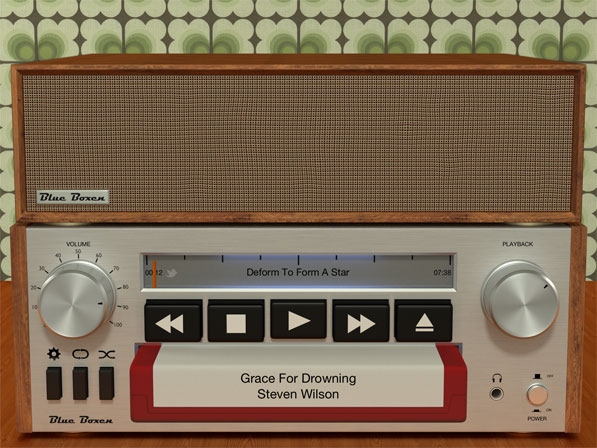 By Mikhail Madnani on 5th May '12 in iPad

Eight Track Stereo is a Huge Dose of 70s Nostalgia

In today’s world when most people listen to music on their devices digitally, the vinyl record is making a comeback with increased sales year after year. Not many people remember or know about the 8 track tape format that existed alongside the vinyl record. For many years it was considered a viable replacement for vinyl with portability and the ability for car playback. With apps like Air Cassette and Vinyllove doing well on the App Store, it is clear that retro nostalgia inducing apps have a market. Most people would see the 8-track stereo as an anachronism but Blue Boxen, two brothers that build apps, want to take you to the 70s on your iPad with Eight Track Stereo.

Eight Track Stereo has a nice 8-track stereo player interface with interactive controls just like the real thing that was quintessential for the music lover back then. Every button has been designed carefully and the amount of detailing in the small reflections and shadows during interactions is something I absolutely love in apps. The tuner on the main front panel view has your song length and song name with a small twitter button that lets you tweet the current song. Once you turn the stereo on, there is a small backlit blue section on the tuner that is one of those things that makes you appreciate the effort that was put into this app. Tapping the song title reveals the album track list or the track list for that particular artist. I encourage you to listen to music album wise for the complete experience. There are easter eggs hidden almost everywhere. When you plug your headphones in, there is a small wire that gets plugged into the headphone slot on the stereo in the app which was the icing on the cake for me. Hitting the eject button reveals an iBooks-esque bookshelf with 8-track tapes with the album art from your iTunes library. The app also works with songs in the cloud/iTunes Match. Scrolling down also reveals a nice blue shag carpet and I think it is a crime to only show this when you scroll down.

The App Store description for the app has an amazing line that I love:

When the best in portable music players of today just isn’t quite good enough, just add in a little bit of rich mahogany, shag carpeting and tacky wallpaper, it doesn’t get much better than this!

I would love to see a portrait mode that features a front view of the stereo with a shelf below and the shag carpet visible at all times and also some sounds for the buttons you press. The only let down to this app for me is the icon. It looks like it was designed for some other apps and completely ruins your first impression when you see this on iTunes. I hope they have a better icon for future updates as I really love what they have done with this app. There is a slight lag while fast-forwarding songs but then back in the day no one fast-forwarded songs so I could let that one slip. If you want a good dose of 70s nostalgia or just love attention to detail and want to add a physical feel to your music, you should buy Eight Track Stereo. It is available on the App Store for $2.99.

Go Metro on your Music with Track 8 for iPad

eBay’s New iPad App is All Kinds of Awesome