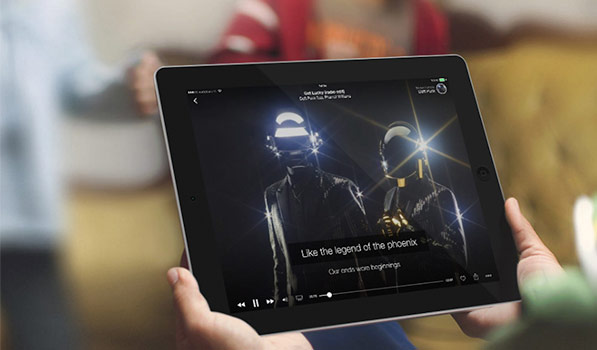 musiXmatch Makes You Want to Sing to Your Favourite Tracks

You may be aware of an app called Tunewiki that shut down citing lack of sufficient ad revenues to sustain their business. I for one was very saddened to hear the news. Though the app wasn’t oozing with beauty, it did this one thing right for me — pull out lyrics over the internet for the song that was playing, with a karaoke-like auto scrolling mechanism. Recently, Mikhail came across musiXmatch, which was part of Federico Viticci’s Must-Have iPhone Apps of 2013. I was delighted to know of an app that not only did the lyrics bit, but looked darn good while at it!

musiXmatch is available for a variety of platforms including iOS, Android, Windows Phone (phone and tablet optimised for all). There are Windows and Mac apps too, but today I’ll be focusing on the iOS version. The app uses a tried and tested combination of white, grey and orange across their interface. The first screen you see is your music library. Click a song and it takes about a second or two longer for the app to fetch the lyrics and artist photo. The photo covers the entire screen and you can see more if you flip the device in landscape. There’s a one-click button to favourite a song which puts it in the favourites list. It also helps you discover more music from that artist, shows similar artists, all of which eventually takes you to the iTunes store.

Lyrics syncing worked well most of the time. They claim to have 7 million song lyrics in 32 languages. I mostly listen to mainstream stuff, so it was able to fetch lyrics for most of my library. So, what if you want to sing along too? musiXmatch has a ‘vocals removal’ feature. It takes a few seconds to process and shows you graphically when the vocals come in, sort of like a cue if you’re not too familiar with the song. It doesn’t entirely clean the track of its vocals; I could hear a faint echo in some tracks while it failed to remove some high-pitch audio in between some Daft Punk songs. Also, the quality of the audio is hampered because of this feature. But it’s a workable option if you want to sing to your favourite tracks without the vocalist overpowering your voice. You need to have a headset connected though; this feature won’t work on your iOS device’s speakers.

The masterstroke of this app is in its AirPlay feature. That’s right, when you have a bunch of friends over and want to do some karaoke, musiXmatch will stream wirelessly to your television using an Apple TV, showing the lyrics and artist cover photos across the big screen. The caveat comes with the recurring costs. While the app is free to download, to remove the ads at the bottom and get this AirPlay feature costs a little less than five dollars a year. Fair enough if you ask me, but the ‘vocals removal’ feature only works for a couple of songs at a time even if you’ve paid for the subscription. The “Live Pass” costs $2 a day which again isn’t too steep to pay if you’re having a night of karaoke planned with your friends! But if you’re planning on using this feature regularly, you’ll have to opt for weekly or monthly “Live Passes”.

Lastly, you can also look up lyrics to songs that aren’t in your library. If you can’t remember the song title, it can be found by typing in a few words of the lyrics. Then there’s the MusicID feature (powered by Gracenote) that offers unlimited Track ID. It will even pull up lyrics of identified songs. All in all, musiXmatch is a great-looking app to have if you care about lyrics. The AirPlay feature can convert your phone into a karaoke machine. They also sell a mic accessory if you’re really into it. The best part is that you can at least experience the app for free. You can download it on the App Store here.

Scantastic – The Best Looking Scanner App for Your iPhone