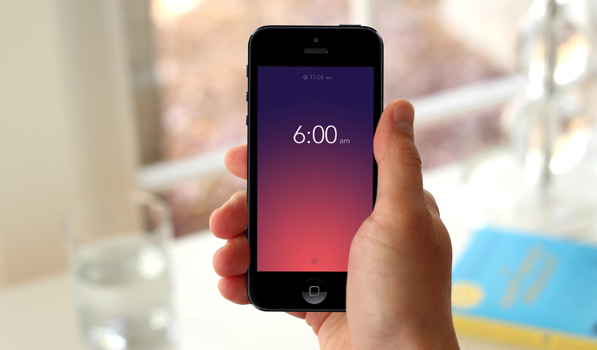 By Preshit Deorukhkar on 6th February '13 in iPad, iPhone

Rise Alarm Clock is a simple alarm app by Simplebots for your iPhone or iPad. The app debuted on the App Store back in December and received excellent reviews from the press back then. However, the first version did lack a few desirable features in the app, which made it not such a great choice in spite of its brilliant looks. However, Simplebots have now released v2.0 of Rise which adds much of the requested features, making the app a solid alarm app alternative on the App Store.

Rise features an absolutely stellar yet practically minimal design. It features a tiny clock showing the current time at the top of the main screen and puts the alarm time in the dead center. To set an alarm at a specific time, simply tap and drag the time up or down. As you move the timer, the gradient at the back changes colors according to the time of the day. There’s a nice animation as the time moves to the left when you tap the screen. You can make minor adjustments by tapping on top or bottom of the set time. Once you’re set, swipe left or right to turn the alarm ON. I loved the tiny detail where the time is shown in white on a background gradient, but as soon as you turn the alarm ON, the background goes dark while the digits of the time are filled with the same gradient that was in the background. It’s little things like this that win big points from us.

Once you switch on the alarm, Rise displays tiny “+” and “-” keys below it so you can fine tune the time on the fly. It will also tell you how many hours and minutes you have left before you ‘rise’. You can also create a quick playlist to play as you sleep from within the app. When rise stays inactive for a while with the alarm turned on, it goes into a large clock mode so you can dock the iOS device next to your bed. This also works in the landscape mode and looks great. Although you can only set a single alarm in Rise, you can have it repeat daily if you want it to. The app ships with its own set of alarm tunes or you can pick one from your music library.

Rise has a collective goodness that makes it such a marvelous alarm clock app. The UI is absolutely stellar to work with and the quick gestures make it a joy to use. It looks great on both the iPhone and iPad and with v2.0 that came out on Jan 28th, it’s added a lot of nifty features. Rise Alarm Clock is $1.99 on the App Store and you should definitely give it a try.

Shiny Groove is a Scrumptious New Mac App for Grooveshark

Horizon Calendar – Your Schedule and Weather in One Place