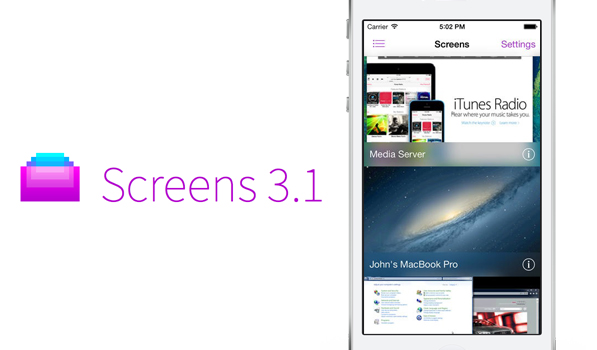 By Mikhail Madnani on 22nd November '13 in iPad, iPhone

Ever since I got my iPad 1 when it launched, I’ve been using a remote desktop app. I used Splashtop until more recently. When iOS 7 shipped I discovered Screens VNC by Edovia and haven’t looked back.

When it comes to apps like this, most people would neglect the interface because after all it is all about your computer on the other side, but if the interface isn’t well thought out, things become frustrating. Screens is polished and you notice that from the get go. Screens makes use of a purple highlight look on a clean white themed interface. There is also a lot of live blurring in the sidebar and the main screen list. When you actually connect to your computer, Screens has a powerful toolbar at the bottom that lets you interact with it. The toolbar is customizable and it allows you to summon or dismiss the keyboard, grab a screenshot, get or send a pasteboard and close the connection. Closing a connection has a nice animation as well and all these subtle things leave a very nice impression on you while using the app. The toolbar shortcuts can include editing shortcuts, navigation shortcuts, function keys among other things. The iPad UI includes a dual pane layout and in both devices, edge swiping will bring a list of nearby and remote computers. This screen also allows adding a new screen and accessing the app settings.

Adding a new screen is quite simple and the app has a quick walkthrough for it. Once you’ve added your screen, it is saved on the main view and the app even syncs these screens via iCloud. I love the view that has all the nearby computers because in most cases you can just tap on that and connect. Screens has a lot of functionality for power users. In 3.1 it has support for hot corners that can be triggered by swiping in from the respective corners. Having hardware keyboard support is great and Screens handles multiple displays very nicely. Spending some time with it will get you the most out of it because there are small things like “on disconnect actions” and “snapshot grabbing”.

Screens also offers a Mac utility app called Screens Connect that once installed, offers a zero config way to connect while you’re not on the same local network. Unfortunately, in our testing, we still had to do a bit of config on our routers to get it to work. While Preshit managed to get it work, I still cannot connect via 3G.

Screens is still the best looking VNC client for iOS and comes with a feature-set that makes it a solid VNC app. The fact that it works well even on my iPhone where I wouldn’t even usually think of doing something like this is awesome. Screens 3.1 is available as a Universal app on the App Store for $19.99.

The Side: Briefs 1.2 & Briefscase for Android

Hatch — A Lovable Virtual Pet for Your iPhone