By Mikhail Madnani on 14th October '14 in iPad, Opinions

The State of iOS 8 on the iPad

When Apple announced iOS 7 at WWDC ’13, everyone turned into a design critic. Although it was a huge step away from the design principles we were used to, everyone was optimistic about a new direction for iOS and the apps on this platform. After the announcement, the iPad release for the iOS 7 beta was delayed by about a month. This delay felt like the beginning of the iPad taking the back seat to the iPhone, when it comes to software development at Apple. Even today, it feels like all the effort of optimizing iOS goes into the iPhone version and the iPad version on the other hand gets rushed out to meet deadlines. The performance of iOS 7 was horrible on iPads (even the iPad Air) and it was mostly fixed only with iOS 7.1. With iOS 8 now, the situation is the same. I have an iPad 3. I know it is underpowered and each iOS release makes that more evident. I assumed iOS 8 would offer a good experience on the iPad Air, but after playing with it as well as the iPad mini with Retina display, it’s clear that iOS 8 on iPads is clearly far from ready. Although there are loads of bugs and performance issues that currently exist on iOS 8, this post is not for those. Instead, let’s talk about some of the interface issues, design oddities that are seen on iOS 8 and how the iPad’s potential is being wasted by not taking advantage of the larger canvas. Although iOS 8 brings tons of great things like actionable notifications, proper inter-app communication (with action sheets that don’t get crowded by pointless apps), and features like Continuity & Handoff, but there are still some glaring issues that continuously annoy many users.

With the release of iOS 7, system folders were restricted to just a 3×3 grid with multiple screens. This makes a lot of sense on the phone, because you can access all the apps in the folders with your thumb and it makes for great single handed use. On the iPad though, not so much. The screen is huge and there’s no point limiting folders to a small 3×3 grid on the iPad screen. Folders on iPad are a definite step in the wrong direction and I was hoping something would change on iOS 8, but nothing did. There’s also this annoying interface bug where the corner radius of the folder background changes after opening a folder. Here’s a video below that shows the bug on iPad. If you prefer GIFs instead, here’s a GIF to better demonstrates the corners resizing.

The iPad has become quite powerful over the last few years and yet, multitasking is still so limited. There were rumors of split screen apps and hopefully this actually happens in iOS 8.1 on newer iPads, because the RAM limitation in older models causes apps to reload and the multitasking experience isn’t pleasant at all. Microsoft nailed this with running two Modern/Metro apps on the screen at the same time in Windows 8. I thought the split view app paradigm would lead to split screen multitasking eventually but nothing has changed for iPad apps in terms of structure since the introduction of the iPad in 2010. Oh, and I do think that having your contacts displayed at the top of the multitasking view is absolutely unnecessary and I’m glad there’s a way to turn this off. 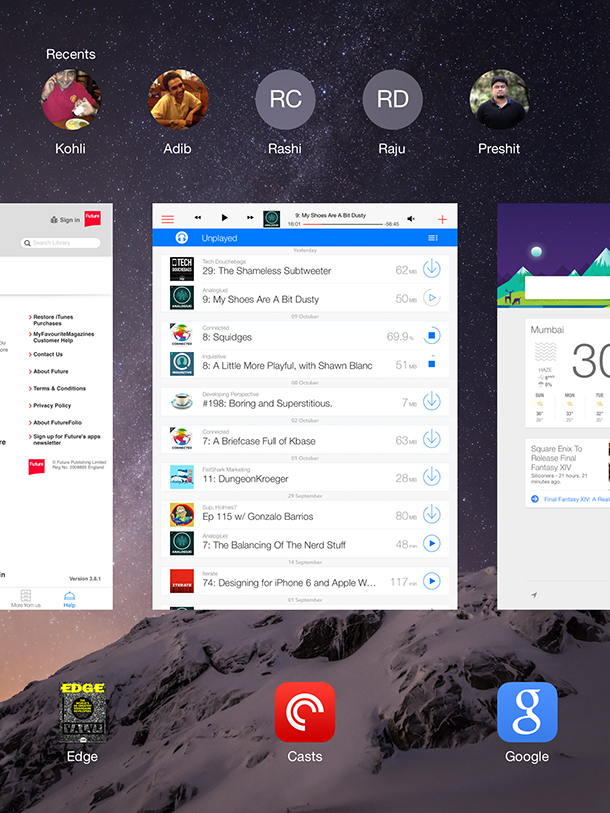 The iPad mini has been around for 2 generations and iOS on it is a pain to use. This is mostly because it just runs the same interface at a smaller scale due to the smaller screen. Touch targets like clearing notifications and deleting apps are nearly impossible to tap in one attempt. Even the Send button in messaging apps feels too small. When I used the Nexus 7 back in 2012, I was impressed by the few well designed apps at the time and how they and the OS treated 7 inch and 10 inch screens differently. There needs to be proper scaling for the interface across different screens. Having the same resolution and having the UI scale down makes it easy for developers and for people to say there’s no fragmentation, but these things matter to end users who spend a lot of time with their iPads. Apple even fixed the clear button in Notification Center pre-iOS 8 with a nice larger touch target for Clear, but reverted to the small x in a circle and a smaller Clear button.

For a company that basically saved the music industry with the release of iTunes and iPods, Apple has consistently had a bad music player app in iOS. The Music.app experience on iOS 7 and 8 has been frustrating to say the least. The UI is just plain bland and I find it hilarious that the Remote.app has a better look for playing music when it controls music on other devices. Apps like Ecoute and the now defunct Track 8 are far better music apps than the stock one. Control Center and the Lockscreen music controls are terrible. They are far too close to each other and it feels like almost no thought has gone into them. The Lockscreen music controls for iPhone are even worse. The music app on the iPad is basically a blown up version of the iPhone app and this is a huge problem because having artwork displayed at 1536×1536 looks bad since a lot of music on iTunes doesn’t even have artwork at that resolution. 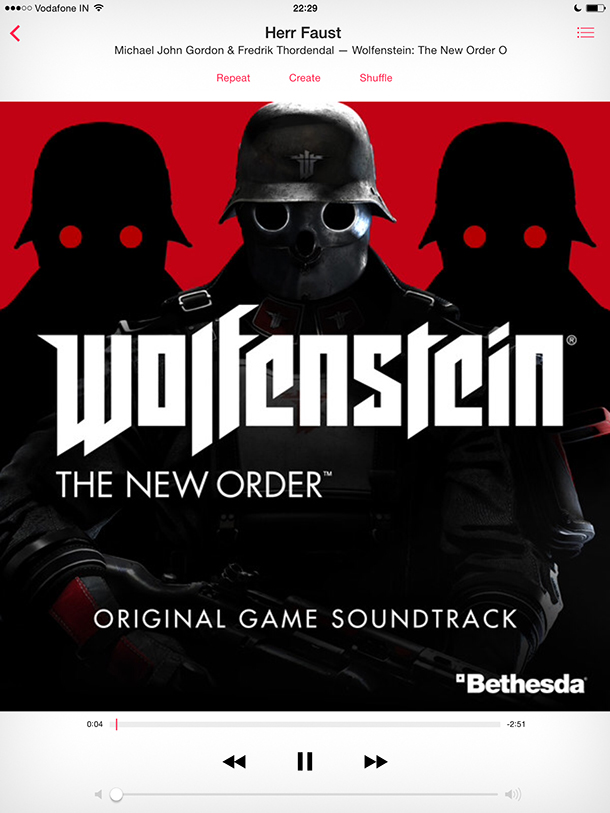 I spoke to Marc Edwards of Bjango and Russell Ivanovic of Shifty Jelly about their thoughts on the current state of iOS 8 on the iPad.

1. What are your thoughts on the current state of iOS design on iPad?

We’re in a strange transition period — moving from the fixed resolution targets of iOS in 2010, into a future with Auto Layout and apps that need to behave like responsive web pages do. Sure, there’s only one iPad resolution (in iOS points) right now, but it seems like we might get bigger iPads soon. Also, the iPhone 6 Plus is dangerously close to being a small iPad.

I think iOS 8 reflects this state of flux, as do many third party apps.

I think the iPad was an exciting new device when it launched, it was meant to be the car everyone drove while programmers like me drove a truck. For me though it’s always been an amazing consumption device and a fun device to play games on. I’ve never liked it for productivity style things where a laptop/desktop always felt more comfortable. This is an extremely long way of saying that I think design on the iPad has stagnated, because the people making the apps generally don’t use iPads for very interesting tasks.

2. We haven’t really seen a new paradigm since split view controllers for iPad. What would you like to see on iOS 8.1 or 9 on larger screens?

Popovers, split view controllers and iOS’s Auto Layout size classes seem to cover most of the standard tools we need to construct iPad UI. I did like webOS’ Sliding Panels though (similar to Android Fragments). They’d certainly make handling different device display sizes a little easier. Although, developers can always roll their own solutions — Apple gives us enough to build pretty much any UI you can imagine.

I think split screen apps, if done well will be a huge boon for iPad users. That said, I still struggle with the basic premise that for, me, the laptop is a far better device than the iPad will ever be. I see it becoming an amazing computer for people who are not that into computers. People who want to check Facebook, watch some videos and send a few emails.

3. Where do you see iOS design going, now that we have a larger screen phone that is supposed to get custom UI as Apple showed with some apps and iOS design on iPads.

I like that Apple are promoting the iPhone 6 Plus’ landscape orientation as a place to display more features. In terms of where it’s heading, I really do think we’re going to have to start thinking more like responsive web design. Building fixed sized layouts just won’t work in a future with so many different iOS devices.

That’s a tough one. Initially I see a lot of ‘blown up’ apps coming, things just getting bigger. Bigger table views, bigger lists, bigger grids of things. After a while though I think developers will start to try and add more features for phones like the 6+, or make existing features more accessible.

We are a few days away from Apple’s iPad and Mac event. Hopefully the new iPads will have true split screen multitasking among other improvements because when it comes to iOS on the iPad, Apple has dropped the ball for far too long.

Clips is a Supercharged Clipboard Manager for iOS 8