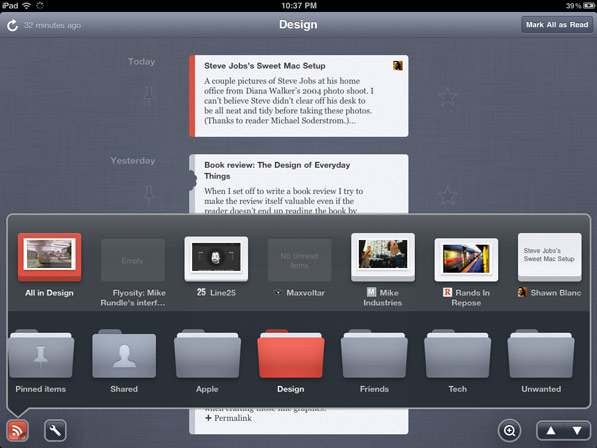 By Milind Alvares on 18th November '10 in iPad

The Feed, a refined approach to RSS on the iPad

I love it when designers create applications, rather than an applications developer hiring a designer to polish up the pixels. What you end up with is not just some pretty buttons and animations, but an intelligent interface built from the ground up. The Feed is a fantastic RSS reader for the iPad, built by Ocean Observations, primarily a design agency (although the only person I know from that team is Max Rudberg, the jailbreak theme guy).

Rudberg of course seems to have been the driving force behind the design, as he introduces the app on his blog:

During one of the creative days at Ocean, a FedEx day, me and my colleague Sebastian Evans decided to try and come up wih a design for an RSS reader for iPad.

We are both heavy Google Reader users, so this was familar ground for us. At the time, the iPad I bought off of ebay arrived just a few weeks earlier. The iPad already felt like the ideal device for consuming content, but the RSS readers were less then optimal for the new format.

What we set out to do was a as direct an RSS reader as possible. Immediate acces to your content, no navigating through narrow lists that forces you to focus on only a fraction of the screen.

The Feed stays true to its purpose: putting content first. It’s a free app, and I highly recommend you give it a try.