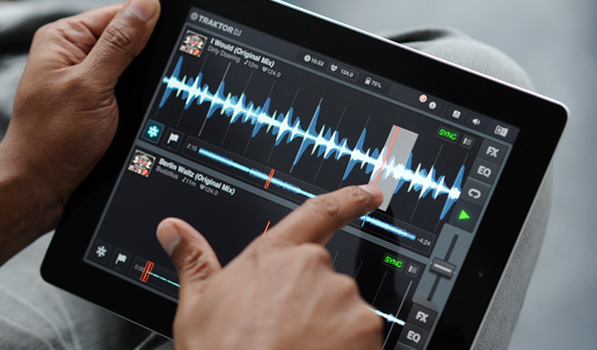 By Preshit Deorukhkar on 8th April '13 in iPad

When it comes to digital music production, Native Instruments is one of the most talked about companies in the industry. Native Instruments is very well known for their innovative products used by thousands of audio producers, DJs and music composers all over the world. One of their most widely used suite of products is the Traktor lineup, which brings the art of mixing tracks on the fly to your digital devices. A couple of months ago, the company brought Traktor to the handy screen of the iPad with the introduction of Traktor DJ for iOS.

Traktor DJ for iPad is one of the most incredible apps that I have played with on iPad. Native Instruments have managed to bring in some powerful features that Traktor is known for, in a very unique and satisfying way to the iPad. Instead of going with the conventional way of using turntables for the interface, Traktor DJ makes use of audio waveforms for A & B decks. The decks are laid out on top of each other and not left/right, so you get much wider waveforms to play with. To load a track into the deck, you simply swipe up from the bottom to load the library or tap the library button at the top right. As you play the tracks, you can touch, pinch, backtrack, scratch and pretty much play with the track’s waveform the way you want to. This itself is so well executed in the app, it’s crazy. Looping is as easy as tapping with two fingers. The developers have gone the extra mile by letting you change the loop on the fly — you can resize or reloop while the track is playing just by tapping the screen. It’s super intuitive and a lot of fun. There’s a FX tray with a eight built-in effects that you can apply to your tracks. Of course, a 3-band equalizer and crossfader, sync, manual tempo and other nifty features are also included in the app.

But hands down, the best feature of Traktor DJ is the freeze mode. The icon at the bottom left of each track enables the freeze mode — which essentially freezes the waveform in place while the play head continues to play over it. This lets you tap each point on the waveform so that the play head momentarily jumps there and starts playing. Thus, you can manually tap your favorite part of your track. This feature is best tried on yourself and believe me, it’s so much fun. Traktor DJ also allows you to record your mixes directly on the iPad and share with your friends. If you have Traktor Pro on your Desktop, the app will even sync the track’s meta data via Dropbox.

Native Instruments have managed to put out one of the best iPad apps that I have come across on the App Store. The app manages to find a common ground between a professional grade DJ app and a consumer, for-fun music app — so you can easily entertain a small party of friends or a huge audience. At just $19.99 on the App Store, it’s easily one of the quickest app purchases for the iPad. Chances are, you’ve taken this dive already.

Cubasis is an Elegant Digital Audio Powerhouse for iPad