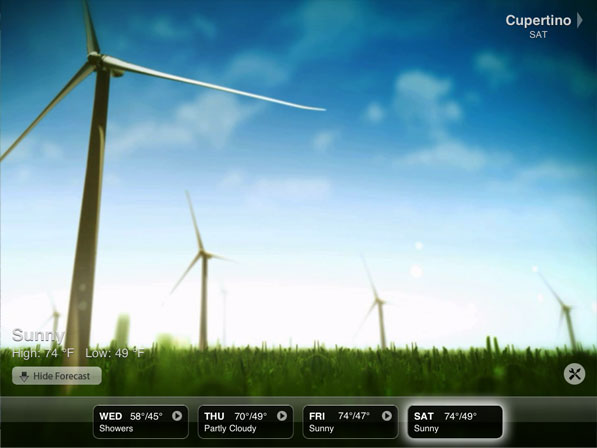 Weather HD: Wow for the sake of it

Since the conspicuous absense of Apple’s default weather app on the iPad, we’ve wondered what a weather app would look like. Turns out, HD video is the answer. Weather HD brings you the weather backed by a stunning HD video of that climatic condition. It’s got videos for snow, rain, thunderstorms, and a lot of clouds, each of which looks absolutely stunning on the iPad’s screen—portrait or landscape. It displays the current weather, wind speeds, and humidity, in a corner, and you can even pull up a forecast tab for four days ahead.

The wow lasts only so long though, as the videos soon get repetitive, and don’t contribute as much as you think they would (reminds me of Windows Vista’s video wallpaper feature). It mixes up the videos of the clouds, so partly cloudy and clear skies might show the same video. At just a dollar though, I don’t regret it; don’t think you will either.

I’ve embedded their promotional video below, but I’m afraid it’s nothing like seeing the real thing.