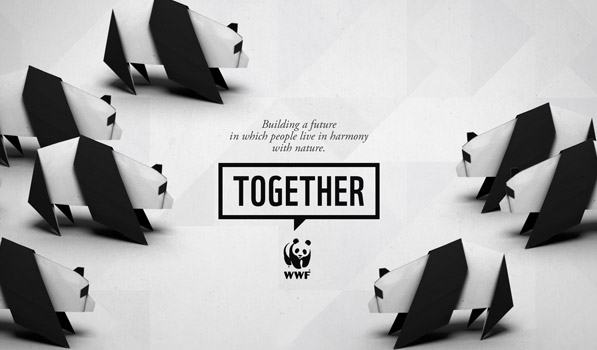 By Preshit Deorukhkar on 7th May '13 in iPad

One of our awesome readers, Pete, sent us a link to this amazing app by the World Wildlife Fund (WWF). Making great use of the iPad’s real estate, the WWF Together app introduces you to the world’s most amazing animals in a fun and interactive way. Beautifully designed, the iPad app tells the audience some fascinating facts about the animals and makes us aware about the problems faced by them.

The app follows an Origami theme for each of the animals and takes you through specially put together story streams for each animal. The stories are available for Giant Pandas, Marine Turtles, Elephants, Tiger, Bison, Snow Leopards, Polar Bears, Whales, Rhinos, Gorillas, Sharks & Jaguars. Each animal is also assigned a trait that you can see when you tap on an animal and enter its story, which is a 3×3 grid that you can swipe horizontally or veritcally. Each screen in the grid tells you something about the animal or WWF in general, about their efforts in savin the endangered species. It’s a absolutely fascinating look at all these animals and not only thoroughly enjoyable but also a great deal of learning can be done through it. At the end of the story, you learn to create the animal via the art of Origami.

The designers & developers have done a remarkable job with the app. It reminds me a lot of the Al Gore — Our Choice app. There are some stunning photos, videos & other interactive elements that you can play with and thoroughly enjoy. The soothing music that plays in the background adds to the experience as well. The app can be downloaded Free from the App Store.

This article has additional screenshots that are not available via RSS. Kindly click through to the website to view those.