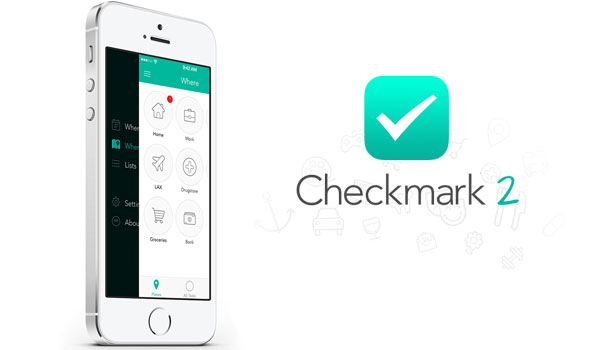 By Mikhail Madnani on 18th March '14 in iPhone

I reviewed Checkmark when it released almost 2 years ago. To this day, the original app outclassed Apple’s own Reminders.app in every way but sync. Today, Snowman has launched Checkmark 2, a major upgrade to the original app. Checkmark 2 is a completely new app built from the ground up for iOS 7. It packs an amazing feature-set and a really great new look. Unfortunately, the new app omits a few things I really liked in the original app that would have made it indespensable.

Checkmark 2 (henceforth Checkmark) utilizes a clean light theme with a green highlight throughout its UI. Aren’t you already glad it isn’t using blue everywhere? The icons and glyphs used in the app are now wire thin. The navigation bars are green and animations have been given a playful feel with some of them doing subtle bounces when you swipe. The aim of Checkmark has always been to let you set reminders in as few taps as possible. Checkmark lets you set location and time based reminders very quickly once you have setup your locations. Tapping the hamburger button on the top left brings the main navigation drawer out. This has the 3 main categories of reminders and items you can create. They are time based, location based reminders and lists. Each of these sections has its own set of scheduled, recurring and completed reminders spit up by tabs at the bottom.

Creating a reminder or a list is easy. For location based reminders, you need to set up a location first. This can be done by tapping the + on the top right. This is where many users who are let down by Apple’s Maps.app will face a few hiccups. After naming your location, you can either add from map, use your current location or use an address from your contacts. Adding current location makes the most sense in a place like Mumbai, India where Apple’s Maps are pretty much unusable. After assigning a glyph to it, you can double tap it to create a new location based task. The task creation window slides down and you can edit date and set it to remind you either on arrival or departure. There’s even a granular control for being reminded X minutes after arriving or after leaving a location.

The new app also has some great new features like location groups. The recurring reminders are now fully customizable and location reminders can have dates assigned. Checkmark 2 has iCloud sync to backup your reminders and all new alert sounds.

Unfortunately, Checkmark 2 reminders lack the snooze feature that the first version had, which was really useful. Preshit, Amar and I all extensively use Due with its nagging snooze to get work done on time. Ryan has confirmed that they would add it back in a future update. I also hope Google Maps or Foursquare location data can be added in an update so I don’t have to waste time manually adding a location from the map. Checkmark 2 is not just a location based reminders app. Coupled with the snooze, lists and location reminders that work flawlessly, Checkmark 2 can essentially replace Clear, Due and the Reminders.app for someone, which is a huge deal. Checkmark 2 looks fantastic and does the job perfectly. It is available on the App Store for $2.99 at 50% off for a limited time.

As with the first version, Checkmark 2 has a really nice promo video.