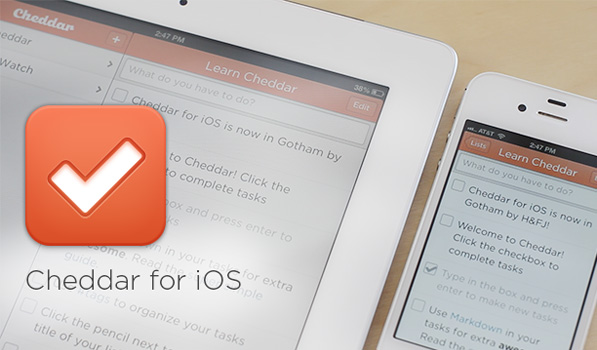 By Preshit Deorukhkar on 29th June '12 in iPad, iPhone, Web

How often have you tried searching for a simple, clean & feature-rich app on the App Store and come back disappointed? Even though the App Store boasts thousands of apps, very rarely do you find an app that packs a powerful set of features and yet comes in a outstandingly sexy UI. Cheddar is one of those few apps.

Cheddar is a simple ‘list-making’ app available for iPhone, iPad and the Web. It lets you create lists and then add items to those lists. Before I dig down deeper, let’s take a quick trip back in history. Cheddar has been designed & developed by Sam Soffes and originally began as a invite-only, web-only app. Back then, it was a part-time project for him as he was employed elsewhere and used to spend whatever free time he could on it. I first got invited to the ‘beta’ service back in March 2011. My first impressions of it were immensely positive. While others were still playing with the likes of Omnifocus, Things and The Hit List, I had found something that was simple, clean and did exactly what I was looking for — a simple way to list down tasks and attend to them later. As I continued to use it, I couldn’t help but wish there was an iOS counterpart to it.

Fast-forward to today, Cheddar has finally been released and boy has it come a long way. Cheddar is primarily a universal iOS app that lets you keep your world organized. It gives you a ridiculously simple way to create lists and add items to ’em. In Cheddar, all you do is type. It includes a box at the top that asks you, “What do you have to do?”. Start typing and hit Return to add another one. It’s super simple and super easy.

The most striking feature about Cheddar’s iOS app is its UI. Granted, that’s the reason why we feature apps here on Beautiful Pixels, but Cheddar has a lot more ‘awesome’ in its hat. The app features Gotham by H&FJ and it looks absolutely spectacular on the Retina Displays. This results in a beautiful and clean UI very rarely seen in other apps and makes the whole experience a complete joy. The Universal app comes in at a tiny package of 1.3MB, and both the iPhone and iPad UIs are pretty responsive.

The web app has come a long way since I first laid my eyes on it. It follows the same ideology as the iOS apps — it’s clean, responsive and packs a whole lot of features. Since Gotham is not yet available for the Web, Cheddar uses the next best thing which is Proxima Nova. You can reorder your lists, items and add new stuff the same way you would in the iOS app.

Not only is Cheddar beautiful, it’s quite powerful at its features. Cheddar has one of the best implementation of syncs I have ever seen. Any changes you make are instantly, literally instantly synced across all your devices. This is nothing short of magical, you can actually see the data change in front of your eyes. Cheddar also supports tagging your list items, just add a #hashtag in the items and you’re good to go. There’s also support for Markdown, so you can have spiffy list items too.

I could go on and on about Cheddar’s beautiful UI and its feature list, but it’s best experienced when you demo it yourself. Cheddar’s iOS app is free on the App Store and requires a Free account, which lets you can create two lists with unlimited items and use it on as many devices as you want. For unlimited lists, you have to upgrade to a Cheddar Plus account which costs $1.99 a month or $19.99 for the entire year.