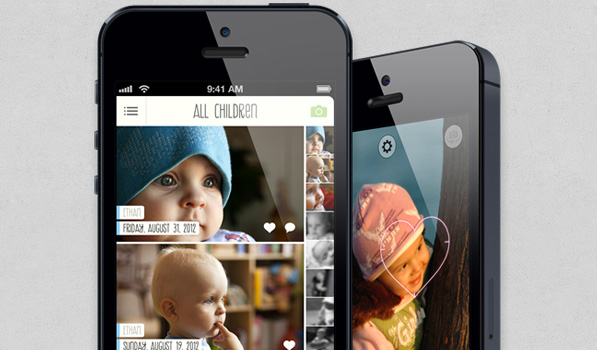 By Preshit Deorukhkar on 26th June '13 in iPhone

Over the last few months, I have come across several specialized iOS apps, ones that are designed and developed for use by parents, families or close friends with private sharing as the most notable feature that they offer. Unlike most social networks, these apps are meant to share your precious moments with exactly the people you want to share them with. While each one has its pros and cons, the one app that caught my attention was First Years.

First Years has been designed and developed in Germany by the talented folks at pixelflut and is an app that parents can use to chronicle their child’s journey as he/she is growing up. It offers a really simple way to capture the precious moments with your child(ren) and store these photos in the app. First Years first asks you to set up your child’s name, date of birth, gender and optionally, a reminder when you launch the app. I love how the background color of this screen changes based on what gender you have selected — it’s pink for Girl, Blue for Boy and stays green for no selection.

You can take multiple photos at one go by default and then review them before adding them to the journal. If you already have photos in your camera roll, you can import them as well. Unfortunately, First Years will crop your square photos, so careful when you import them. The app then lays down all the photos into a single gorgeous stream of moments for you to browse through. The stream has a small strip of thumbnails on the right, that lets you skim through multiple photos with a single drag. There’s a really nice black & white to color fade effect in this strip as you drag your finger over the thumbnails. Tapping the main photo opens it in the photo viewer, where you can share it with anyone or mark it as favorite. A photo can be marked as containing one, several or all your children via the Edit view. Turning your iPhone into the landscape mode shows you a calender view that displays the photos you have taken on which date, along with the count.

First Years might lack some power features compared to other apps, but it has an elegant design, impeccable polish and a really gorgeous design style that makes it stand out. I really liked the font First Years uses for its UI. There’s enough attention to detail in the app to make you smile. For example, it also uses a custom designed Camera UI for taking photos where, when you tap the screen to have the camera focus on something, it shows you the outline of a heart instead of the usual square or circle.

This is just the first version out on the store, so I’m hoping that the developers add a few more features to it. First Years is a truly delightful app and is available at $1.99 on the App Store.

Robin Is a Feature Rich App.net Client for Android