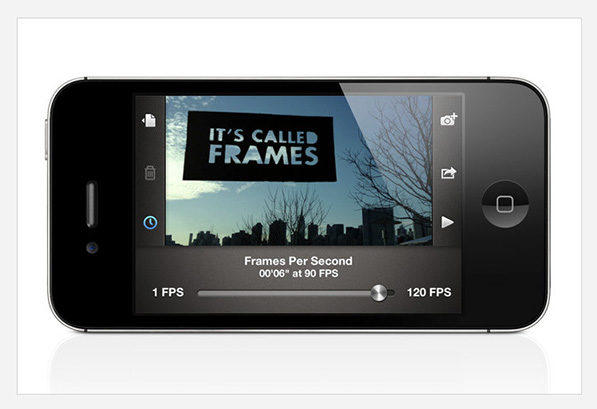 By Lukas Hermann on 13th March '12 in iPhone

Some of you may still remember the story of Tom and Dan of Studio Neat trying to make their idea of an iPhone tripod mount & stand come true. They used Kickstarter and thousands of iPhone lovers funded their company within few weeks. They thanked the community with an awesome product, the Glif. And they did not stop there. Now, after releasing their second accessory, the Cosmonaut iPhone stylus they have come up with their first iPhone app. It’s called Frames and produces stop-motion films using photos shot with the iPhone camera. A nifty trick to increase the Glif’s usefulness, isn’t it?

But speaking in terms of usability and overall awesomeness, Frames definitely can stand for itself. It’s a lot of fun to use and produce short films with it. The interface is simple, neutrally colored and easy to understand. After creating a new project, Frames throws up the camera and you are ready to shoot as many pictures as your iPhone can hold — either manually or automatically with a preset duration between two shots. Afterwards, you can watch the output, smoothly scroll between the frames shot, delete bad or add new ones and export it as a finished video file to your iPhone camera roll. Insanely easy and a lot of fun.

Simple pictograms, nearly no text and sexy (because it’s virtually inexistant) design features also make the app intuitive for everyone and are a phenomenal example for great UI design. You do not need any experience to make funny and serious experiences in time-lapse & stop-motion filming using this app. You can see my first time-lapse video (co-produced with my lovely girlfriend) here on YouTube starring some cuddly toys and a piece of chocolate. If you’re still not convinced, check out Studio Neat’s introduction video as well and then buy it. Seriously, you won’t regret it at all — it’s that cool.