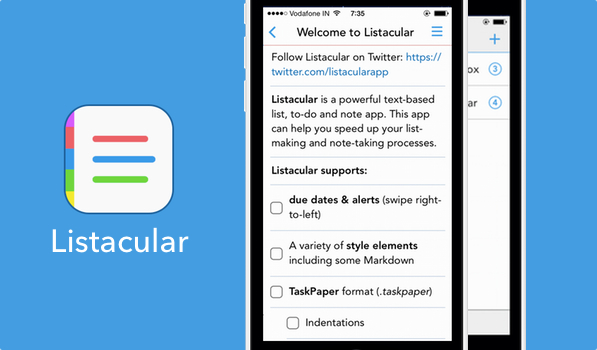 Listacular — One App for Your Lists, Notes & To-Dos

Listacular for Dropbox by Bloomingsoft is an iPhone app that wants to become the one stop solution for your lists, notes and to-dos. We’ve written about GTD apps such as Things and OmniFocus before, but Listacular is different. Unlike Things or OmniFocus, Listacular uses plaintext as its source and formats the text into notes, lists or to-dos depending on how they were entered. Listacular doesn’t have a Mac app, instead, it syncs using Dropbox. Since all files are stored in plaintext, you can edit your tasks, lists and to-dos in any text editing application on your Mac or PC via Dropbox.

Listacular is simple and beautiful, but it can take some time getting used to if you’ve never worked with plaintext based list apps before. Luckily, Bloomingsoft provides a nice tutorial when you first launch the app. The developers have also provided a ready list within Listacular that contains some instructions and examples on how to use the app. The app is very clean and sleek. The main view of the app shows you an overview of your main lists and folders. The beauty of Listacular is in its ability to let you add new notes, lists or to-dos quickly and easily.

While adding a new item in Listacular, you’ll notice a handy row of buttons above the keyboard. You can choose to add a new entry either as a to-do, note or list item using their respective buttons. You can also add this data using plaintext by tapping the ‘hamburger’ button on the top right and choosing plaintext. Listacular supports Taskpaper’s .taskpaper formatting and basic Markdown text formatting such as bold and italic. You can also add a task by pasting text copied from an email or a browser. Listacular respects new lines and formats your data such that every new line is a new to-do item. This can be immensely useful for adding multiple items in your list. The app supports URL schemes for adding and viewing lists, notes and to-dos, which is an extremely useful feature for power users. The calendar is displayed on a blurred background and the animation used to display the calendar is quite brilliant.

Listacular comes with some disadvantages though. While you are asked to confirm the deletion of a list, you’re not asked to confirm the deletion of a list item, note or to-do. Thus accidental deletions can be frustrating. If you create a new entry and the decide that you don’t need it, a blank entry is created. These entries are not purged automatically, instead, they need to be deleted manually. These are small issues and can be fixed in future updates by the developer so they shouldn’t hold you back from getting the app. Listacular is a simple and practical solution for managing your lists, notes and to-dos. The app is available for Free on the App Store but is limited to only 3 lists. If you find 3 lists to be insufficient, you can unlock unlimited lists through an in-app purchase of $4.99, which is well worth it.