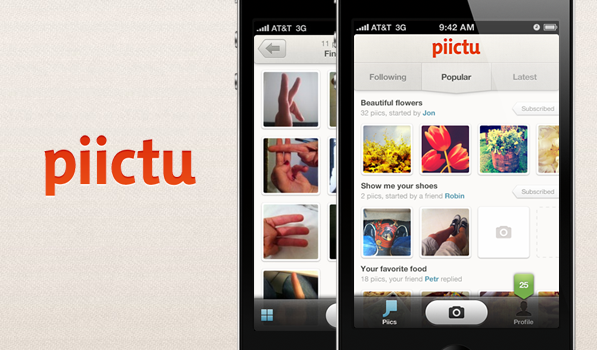 By Preshit Deorukhkar on 10th June '11 in iPhone

Piictu: A Delicious Way to Play with your Photos

Piictu is a new photo-sharing app for your iPhone in an already saturated market, pretty much dominated by Instagram. However, unlike others, Piictu takes a very interesting approach to your photos and is the only app on the App Store to do this so far.

As the tagline, “A fun + simple way to talk & play with piics” suggests, Piictu lets you play with your photos. When a user posts a new photo, a ‘stream’ is created. Others can continue or respond to this stream by their own photos. For example, one of the most popular streams currently is creating alphabets using your fingers. The stream began with someone posting ‘A’ and others followed suit. You’d be surprised how interesting and fun this gets.

The app itself is extremely beautiful. There’s no other way to describe the UI than “A bunch of delicious pixels got together and the designer wizard waved his magic wand to create a stunningly beautiful UI that you just want to chew on and eat.”

While the app is now available on the App Store as a free download, the service is in what is called the “Public Beta” phase. The app lacks some basic functionality like following new users, but the Piictu folks are actively taking user feedback on twitter.

Weatherwise is a Re-Imagined Approach to Weather Apps