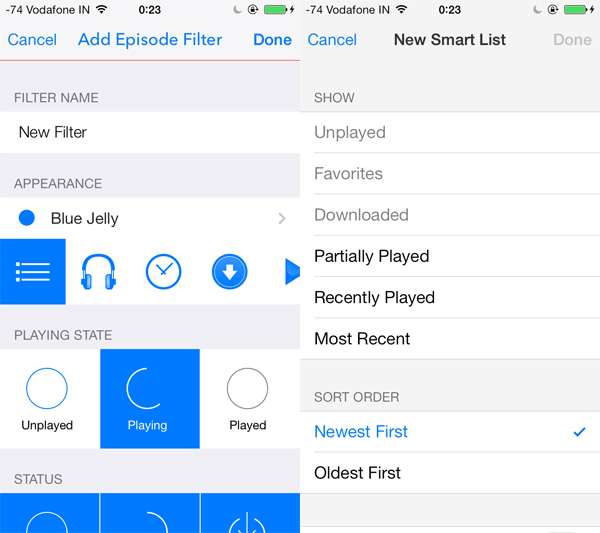 By Mikhail Madnani on 3rd October '13 in iPad, iPhone

I got into podcasts a while ago and listen to at least one podcast daily. It is almost a routine of mine now to play or continue playing a podcast with a sleep timer and then fall asleep. Instacast has been around for a while and I’ve been using it since version 2. Pocket Casts on the other hand, I only just started using when I was testing it on Android and then iOS. I’ve reviewed both Instacast for Mac and Pocket Casts 4. People often ask me which app to buy for podcasts on iOS or Android and the discussion never stops there. On Android, there is no confusion when it comes to which podcast app to use. iOS on the other hand has enjoyed an official podcasts app by Apple and a wealth of other options. My personal favorites are Instacast and Pocket Casts, both of which were updated to version 4 going iOS 7 recently. I’m going to try and help you decide which app is best for you when it comes to podcasts on iOS.

Instacast 4 for iOS builds upon its earlier wireframe and brings an elegant coat of paint to fit right at home on iOS 7. The animations have a lively bounce to them and the app UI is simple. Pocket Casts 4, on the other hand, has been rebuilt from the ground up for iOS 7 and if you’ve used the Android app, you will feel right at home with this one. 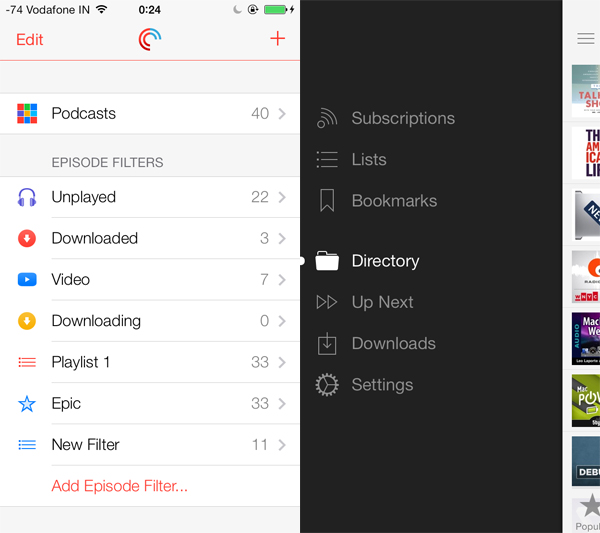 Shifty Jelly hit it out of the park with a great custom pull-to-refresh animation, along with an overall stunning use of bright colors & live blurring. Instacast 4 makes use of a hamburger button for navigation that has a lively view sliding animation, although it does look a little weird with space wasted on the iPad. Pocket Casts 4 has a sidebar menu that looks great with the colors and typography.

The first thing you see when you launch a podcasts app is your subscription list. Both apps have different ways of displaying this. Pocket Casts 4 (henceforth Pocket Casts) uses a collection of thumbnails with album art to list your subscriptions. As of now, there is no way to arrange them by alphabetical order or in order of episodes unplayed. The navigation bar transparency looks really good when you scroll through the colorful thumbnails.

Instacast 4 (henceforth Instacast) lists your subscriptions in a table view with the name, author and network mentioned on the right of the thumbnail with artwork. Unlike Pocket Casts, Instacast allows you to arrange subscriptions in alphabetical order or in unplayed episode order. It also displays the number of subscriptions at the bottom along with the the total offline storage used.

Both these podcatchers have their own directories for podcasts. Tap the + symbol on the bottom left on Instacast to add a subscription and launch the directory that slides up. The directory here has a list similar visually to your subscriptions list with tabs for popular podcasts, author or network, genres and searching. The more tab allows you to import podcasts from the music app on the device, view podcasts with enhanced chapter support and directly enter a podcast feed URL. Instacast has the ability to let you customize these tabs and that’s a nice touch. The EN button on the top right allows you to switch languages and I love the animation for the view that pops up asking you to switch languages. Tapping a podcast shows you the details like genre, list of episodes and you can subscribe by tapping the + on the top right.

Pocket Casts has a lovely red themed directory that utilizes live blur as opposed to remaining clean and simple like Instacast. Featured podcasts are presented to you in nice big artwork thumbnails and the top charts are segregated into audio and video categories. The search here allows you to search by keyword and paste a feed URL to subscribe to it. I love the transparency of the tab bar here. Podcasts that you have subscribed to already have a tick ribbon and when you tap on any new podcast, a detailed page slides up blurring everything behind it with a big subscribe button in green or unsubscribe button in red along with the latest episode name and the relevant podcasts details. You can slide the detailed view up and down slowly seeing the live blur in the background that looks pretty great. 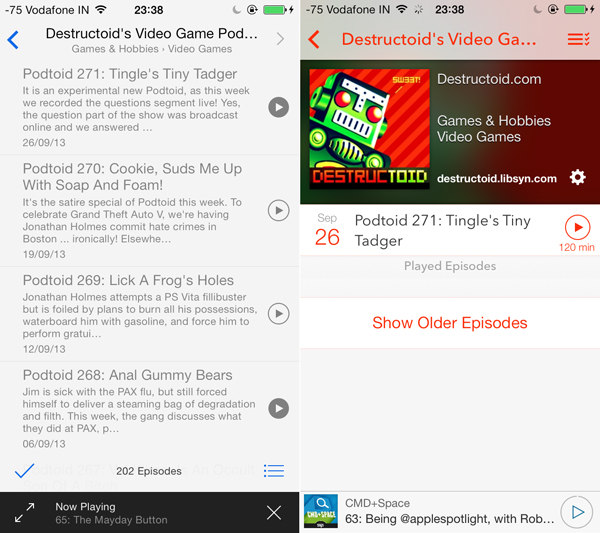 Instacast lists all the episodes by default when you click a podcast while Pocket Casts will only display the latest one giving you an option to view the older episodes by tapping a button below. Pocket Casts displays an episode detail page in the same way the podcast page slides up in the directory or your subscription list. The podcast settings can be accessed from here allowing you to toggle auto download in the background for the podcast. The podcast settings here in Pocket Casts has one of my favorite features of any podcast app. The ability to start playback from a predefined position is great for podcasts with annoying intros or ones that just waste time with a recap.

Instacast has a much better way of handling tappable links in the show notes in an episode detail page with the browser sliding in allowing you to slide back into the position of the notes you were reading. There are 4 buttons at the bottom of each episode page that allow you to either play, download or star an episode. The action button allows you to view the website, podcast in iTunes, send show notes to Evernote, read the show notes later or send the show notes as an email from within the app. The fonts in Instacast are a bit too small in most of the pages in the app and I haven’t found a way to increase the size so far.

Most people don’t even look at their device while listening to a podcast (in the case of an audio podcast, obviously). Both apps have unique ways of making use of the podcast artwork and giving you the ability to quickly set timers among other things. Video playback in both apps is good and Instacast has a resuming issue when the player is minimized causing a noticeable delay before playback resumes. Both apps can play videos in the background allowing you to listen to the audio only for those podcasts if needed.

Instacast has a very clean white look for the player and the controls have their tint set by the album artwork color. There are controls for playback speed, AirPlay, sleep timer, bookmarks and the action button here. Show notes can be accessed by tapping the list button on the top right. The player is also minimized at the bottom while you use the rest of the app.

Pocket Casts has a great animation of the artwork going big when you start playing an episode. The look of the main player is similar to the one for Instacast with a few buttons moved around. Navigation here is achieved by swiping to the left or right with the artwork going through some nice animations showing you the show notes and what’s next in the list. The background for the player is again a live blur of what is behind and the tint controls and background blur tint color are decided by the episode artwork. While the player in Instacast looks good no matter what the artwork is thanks to its simple player, Pocket Casts’s player looks amazing for some podcasts and plain ugly for others depending on the artwork. Pocket Casts’ player has a great lively feel to it with the animations that all react to the way you slide your finger. 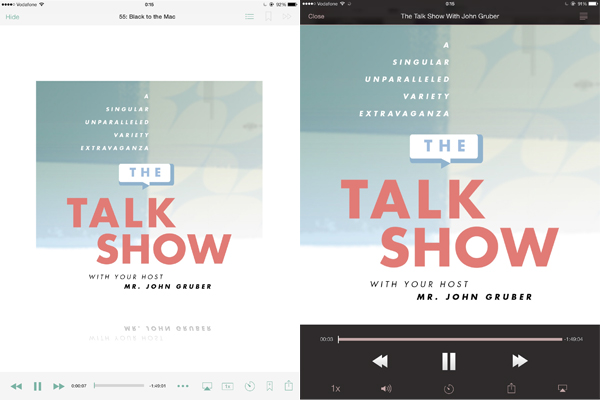 Both apps use a blown up phone UI for the iPad player with Instacast utilizing an artwork animation to make use of the white space around the artwork. Instacast also hides the action buttons on the iPad behind a more button. I’m not happy with the Pocket Casts iPad player UI at all. Speaking of the iPad, Instacast has a lot of wasted white space on the iPad side of things and in some cases I wonder why episode lists and text are cramped into a small place while a few buttons remain in a majority of the screen real estate. Pocket Casts has a nice large font size with better spacing for the iPad.

Playlists are important to many people in podcast apps. Pocket Casts has customizable episode filters that allow you to create lists based on played or unplayed, starred or not, download status, type, and even limit to a few podcasts instead of all. You can customize the color scheme used for the list and the icon used when you create the list. Instacast calls lists of this type ‘smart lists’, although it doesn’t allow any of the theme and icon customizations.

Syncing is one of the most important things a podcast app does for you across your devices. Who doesn’t want the comfort and ability to pause playback on one device and resume on another? Instacast enjoys the best desktop podcast client and near perfect sync with that if you use one iOS device. Sync has been weird when I try and use an iPhone, iPad and Mac. For this review I even deleted the app from my iPad and installed it fresh and logged in to my Instacast cloud account to see how it synced. After a few frustrated attempts with it getting the wrong podcasts, the app managed getting the correct podcasts. Pocket Casts has no desktop client but it has an amazing Android app that it syncs with along with iOS. In fact this is the first cross platform great looking app I have seen that has no real compromises across platforms. Pocket Casts sync is much faster as well. The time taken is akin to syncing your Fever feeds on the server as well as device vs just fetching the feeds already refreshed on the server. Instacast syncs in the background on iOS 7 but when you launch the app and pull to refresh, it takes quite a bit of time while Pocket Casts handles the refreshing on their own servers so it gets done in a few seconds. Both apps have support for background downloads.

Both apps are great at what they do and the final decision depends on where else you listen to your podcasts. Many people who have an Android smartphone with an iPad will find Pocket Casts as the best solution. I’m hoping Shifty Jelly works on a Mac app because that’s the only thing holding them back. Instacast 4 has some UI issues, but it still gets the job done and background downloads have been great with it. The desktop app is amazing and I only wish the sync was better. It is highly unreliable across multiple devices for me. Instacast 4 is available on the App Store for $4.99. Pocket Casts 4 is available on the App Store for $3.99. Both are Universal apps. Hopefully this puts an end to any confusion as to which podcast app to get on iOS.

Skitch 3 is a Nifty Tool for Instant Annotations