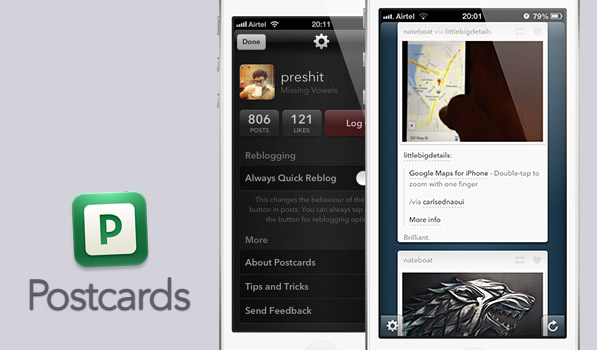 By Preshit Deorukhkar on 29th May '13 in iPhone

Postcards Offers a Nicer Way to Browse your Tumblr Dashboard

For the longest time, I have had a “tumblog” on Tumblr that I kept auto-posting to every now and then, but didn’t really pay much attention to it. Tumblr has always been a really nice platform to blog and share interesting things, but I was just content with WordPress and having full control over my personal blog, so I stuck to it. After Tumblr was recently purchased by Yahoo! and its promise to not screw it up, I decided to revive Missing Vowels. I came across Postcards, a simple & efficient iPhone app that offers a nicer way to browse your Tumblr dashboard.

Tumblr’s own official app for iOS is fantastic, yet Postcards managed to win me over. Postcards features a “cards” interface for every post that shows up on your Tumblr dashboard from the blogs you follow. It lays out these cards vertically and lets you scroll through them with the flick of your thumb. Just flick a card to the left and the next one comes into view from the bottom. Flick a card to the right and the top one comes into view — it’s that simple. This makes quickly browsing through all the posts really easy and fun.

Like something? Simply double-tapping on the card ‘Likes’ the post, just like in the Instagram app. You can also reblog the current card, either as a quick reblog or as a Reblog with your own comment. Tapping outside the card moves is further away, letting you scroll through multiple cards with just one flick vertically. You can also view all the posts from one particular user by tapping on the blog’s name in the timeline.

Unfortunately, Postscards v1.0 lacks the ability to post new content, though the developers say that the feature will arrive in an update. There are no sharing options directly in the app and you have to open the post in the browser to share the post to Twitter and other services. I’d love to see them bring an iPad app too. Postcards is a really nice app & costs $1.99 on the App Store.