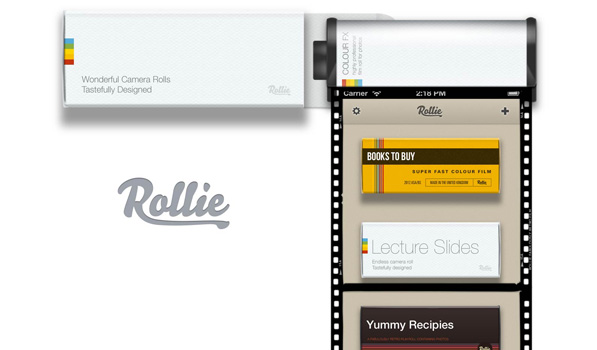 By Preshit Deorukhkar on 16th December '12 in iPhone

Fabulously Retro‘s Daniel Nicolae is back with another stunning, skeuomorphically splendid app for the iPhone. We’ve already taken a look at their previous apps — Meernotes and Meernotes 2, here on Beautiful Pixels and looking at their UI you already have a very good idea of what Rollie will be like.

Rollie is an app that offers you an interesting way to house and organize your photos away from the default Photos app on iOS. The Camera Roll on your iPhone slowly starts becoming a cluttered mess as more and more photos keep getting added to it. Sure, you can create albums directly on the phone, but you can only add existing photos to these albums. Every new photo you take automatically gets added to the Camera Roll. Rollie promises to end this mess by letting you create custom Rolls (albums) in the app, that you can then add photos to. You can either choose existing photos, or click new ones directly in the app. This is perfect for albums like ‘Interesting Signs’, ‘Books I want to read/buy’ or even ‘Something interesting I saw on the commute’.

The UI is what makes the app. You can choose from 5 different roll-styles for your albums and name them. These styles look fabulous and nearly real on the screen. The app is spiffy and transitions are nice. A roll can have multiple photos in it and you can easily manually reorder them. The app has Camera+ integration too, so you can launch Camera+ from within the app, take a photo & enhance it and bring it into the app with a few taps. There’s also Dropbox integration so you can easily export your Rolls to a folder on Dropbox, where the photos are stored as individual files. I personally don’t like the fact that Rollie unnecessarily adds an effect to all your photos when displaying them within the app. Thankfully, the source files you export are exempt.

How practical Rollie is will differ from person to person. I have started with a new Roll where I plan to take photos of shapes and objects that resemble an alphabet, so I’ll see how that turns out. Overall, Rollie does have an absolutely stunning UI and at just $0.99 on the App Store, you can’t resist checking it out.

Static is a Slick ‘Social Network Stats’ App for iPhone