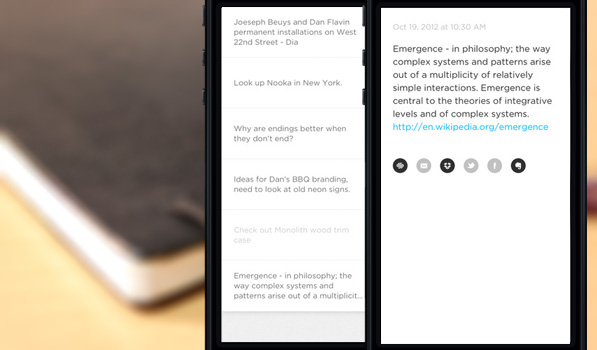 By Preshit Deorukhkar on 31st October '12 in iPhone

Squarespace Note is a Stunning, Minimally Elegant Notepad for iPhone

When Squarespace announced a few days ago that it had released a new app on the App Store, I was pleasantly surprised. Squarespace is known to design and create some amazing products and their iOS app for the core service has already been featured here on Beautiful Pixels. This announcement wasn’t for a new version of their core app, but instead was a completely separate app that they had been working on for a while. When I realized it was a Note Taking app, my first reaction was, “Why!?”. But after having played with it for a few days, boy I’m sure as hell glad they did.

Squarespace Note is a simple & ridiculously minimal app that lets you quickly jot down notes. It is essentially an oversimplified version of Drafts or Scratch — being the solution for the same basic idea. However, the app still has a lot of features going its way that make it an amazingly powerful app in practical use. The UI is extremely simple with almost no UI elements. All major actions are performed via Gestures. The app uses a gorgeous font that looks stunning on the Retina display and goes well with the overall look and feel of the app.

When I wrote about Scratch the last time, I wrote that I had found the perfect fit for my habit of saving bits of information into notes. Scratch did this exceptionally well for me. But Squarespace Note goes up a notch. Similar to Scratch, this app starts with a new note and the keyboard loaded up ready for you to type. Once you are done typing out a note, you simply swipe up to save and add it to the app’s archive. But that’s not where the magic lies in this app. The app lets you set up different destination triggers that are fired every time you swipe up to send a note. For example, you can set up triggers for end points like Email, Twitter, Evernote, Dropbox, Facebook or even a Squarespace account. You can enable or disable these triggers for every note you type or set them as default. For example, you can set the app to email you every bit of information you add in the app by default. The app doesn’t use your own email account, but instead sends the email from their servers, thus bypassing the need of an intermediate Email sheet within the app. Alternatively, you can use Sqaurespace note as the fastest way to Tweet from your phone. Set up Twitter as the default trigger and you can launch the app, type your tweet and swipe to send it. The app lets you split text longer than 140 characters into multiple tweets. Careful when you set up Twitter as the default action though, you wouldn’t want to mistakenly tweet out sensitive info to all your followers.

You can set up the available services for triggers, or a custom end point, by swiping right to left in the app. To view a list of all the previous notes in the archive, swipe from left to right instead. Pull down on either of these screens to edit the list.

Squarespace Note isn’t as powerful as Scratch or Drafts, but it serves its own little purpose. It’s spiffy, has a gorgeously minimal UI and works great. It’s a must-have recommendation from us and is FREE on the App Store. Note that it does not require a Squarespace account to function.

Update: I was just informed by the designer of the app that the app has one feature that everyone seems to be missing. Squarespace Note has a Night Mode built into the app. If you shake your iPhone, you can toggle between Light and Dark Themes for the app. This just made the app even better for me.

Additionally, the app has more configurable settings in the Settings app that let you enable the Dark Theme automagically after Sunset. You can also enable additional gestures for Sending notes. While the default is to Swipe Up, you can also set it to work for Pull Down or have a Send button on screen.

Update March 4th, 2013: The app has now been updated (v1.0.5) that adds the ability to edit notes and also includes Landscape mode.