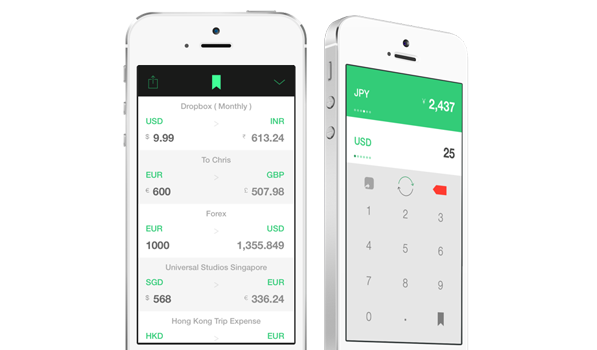 By Preshit Deorukhkar on 28th November '13 in iPhone

Stacks is a smart gesture-based currency convertor app for the iPhone from the same guys who designed and developed Calzy — the elegant calculator app for iPhone. We’ve seen & written about plenty of utility apps here on Beautiful Pixels and for someone who’s already built a calculator app, releasing a currency convertor was the logical next step. But Stacks manages to set itself apart from Calzy by sporting a largely iOS 7 inspired UI that looks and works great.

Stacks has a colorful flat UI with thin typography for the digits. You can customize the color you want from the settings, with choices like Red, Blue, Green, Yellow, Gold, Space Gray, Cyan & Pink. There are some nice interface sounds in the app, which I really liked. Stacks updates the currency rates when you launch the app, or you can manually pull to refresh. The pull-to-refresh animation is lovely and reminded me of the Twitter #music app. You can bookmark your conversions for referencing later, which has a lovely animation attached to it. Turning your phone into landscape shows you a graph of the currency values spread over the last 6 months.

There’s a dedicated button to set your default calculator app, which launches the current converted value in that app for further calculations. You can choose from Calzy (of course), PCalc, Soulver or Calcbot. It is interesting that calculator functionality isn’t built into the app though. Stacks is a pretty neat currency convertor and currently sells for $0.99 on the App Store.

Demonstrate Lets You Demo Your Apps