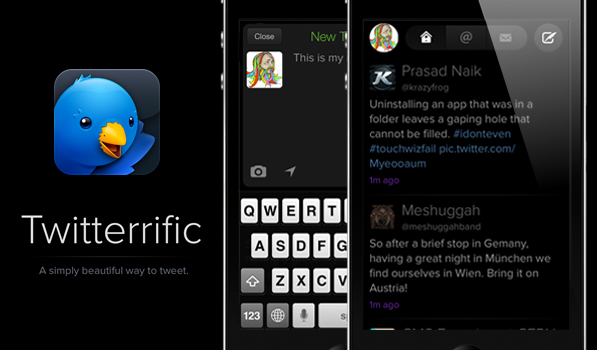 By Mikhail Madnani on 7th December '12 in iPad, iPhone

Twitterrific 5 — The App That Started It All is Reborn

Back in the day, Twitterrific was the first app I downloaded for Twitter on my second generation iPod touch. And I’m sure most people experienced Twitter on their iOS device for the first time on Twitterrific. Ever since then, the app has gone through 4 versions and we now have Twitterrific 5. The app has been completely rewritten from the ground up. Even in this new form, the app is very much Twitterrific. Ollie is now front and center. More on that later.

Twitterrific 5 uses the built in Twitter integration in iOS and also lets you add an account the old fashioned way. At first glance, I was taken aback by the new UI. It reminds you of the Metro (Still calling it that) UI from Windows Phone in many ways. The first thing you will notice is the app finally has pull to refresh and it is one of the best implementations I have seen of it. The animation of Ollie hatching from an egg and flapping its wings as the timeline refreshes is really amazing.

The Iconfactory have made some interesting decisions with the new UI of the app. Your avatar is present in a circle on the top left of the screen followed by a seemingly weird placement for the home, mentions and messages tabs and the compose button. The buttons all have very subtle gradients if at all and look gorgeous. While I’m not happy with the tab placement on the top, it is much easier to go through your timeline with nothing distracting you at the bottom of the screen. The app is full of amazing animations for every view transition. I hate the fact that some views can be dismissed by tapping outside them but others require you to tap on the close button.

The highlight of the app for me is the ability to change almost every aspect of the timeline UI. Tapping on your avatar will bring up a menu or a sidebar on the iPad that allows you to view your saved searches and lists. The bottom of this has 3 buttons that let you switch accounts, customize the timeline UI and view the app settings. A long press on your avatar on the main view will let you switch accounts in only two taps. The appearance button in the middle will bring down an Instapaper-esque view that lets you switch fonts and adjust avatar and font sizes. You can also toggle between the light and dark theme here. I would have loved a simpler method of toggling the theme but then there is an option to have the dark theme on in the night based on your timezone. You can also adjust font spacing and brightness here. If you spend a few minutes playing around with these settings, you will have a breathtaking timeline. While most apps allow you to just adjust the font, you can go all out here. The typography nerd in you can have some fun with Twitterrific 5. With all these options the colours you have grown used to in Twitterrific are still here. Only this time they are implemented elegantly. Mentions are orange while your tweets are green in colour.

It is evident that the developers have tried to minimize the number of taps needed to get things done in almost every scenario. The app has a unified timeline that is colour coded so you never miss any mentions. Twitterrific 5 uses Pocket’s new API and lets you save articles by long pressing links in a tweet. It is that simple. I love the in app browser that slides in from the right if you choose to open a link within the app. Most of us are used to swiping to the left or right for certain actions and gestures are brilliantly implemented here. Swipe a tweet to the right to reply to it and swipe it to the left to view the conversation thread. You can also toggle the iOS status bar by swiping up with two fingers near the top of the screen and bring it back by swiping down. You can still tap the top of the screen to scroll all the way up. The tweet composition and reply composition screens are simple. You can insert an image or location into tweets and for replies you can see the tweet you are replying to at the bottom. The buttons and colour of the title change from orange to green depending on if the tweet is a reply or not. I love that they have the new dark iOS keyboard when the app is in dark mode because it looks great and I hope more developers allow you to use the dark keyboard in apps that require a lot of typing.

The sounds used in the app are really nice. I love the new Tweet / Retweet sound. I have no clue why there is no sound for pull to refresh in the app. Apps like Tweetbot have made me almost expect sounds in apps. Flurry has taken in app sounds to the next level. I hope more sounds are added at some point. The app supports Timeline sync through Tweet Marker or iCloud. Twitterrific 5 also has robust voice over support for the visually impaired.

Where Twitterrific 5 excels in looks and feel, it lacks in certain features we have come to expect in a Twitter app. The lack of streaming over wifi is shocking. While mute filters aren’t a necessity for most, I use mute filters a lot in Tweetbot with their robust muting system. Push notifications are on the roadmap according to The Iconfactory, but launching without them and some other features makes it feel rushed overall before the token limit is hit.

Overall, the Iconfactory have done a great job and reinventing the traditional Twitter app UI that we are used to. Twitterrific 5 makes the timeline more readable and a joy to scroll through. However, the iPad app feels like a blown up phone app. Even the sidebar that can be made persistent in landscape does not look good in either theme. I had to spend about 5 minutes with the appearance menu to make it look good and not make me delete it. I think the app is a lot like Tweetglass (Previously Quip) because it changes the way we view and interact with our timeline. Twitterrific 5 is the best looking version of the app by a long shot.

The question at the end of every Twitter app review is whether it is worth investing into a new Twitter client given the token limits and API restrictions. Twitterrific has been around for a long time so I don’t see them running into any problems and given the rewrite, I’m certain they will be ready for any restriction Twitter’s new API throws at them. Considering that it is a universal app, it is a great deal at its introductory price. Unfortunately, it is not as feature complete as one would hope for use a primary Twitter client.

Preshit‘s Take on the app: My thoughts about the Twitterrific 5 are more or less the same as Mikhail’s. While I love the fact that the Iconfactory decided to completely overhaul the UI of the app, resulting in the stunning & clean timeline view, it’s hard to ignore the fact that it still lacks much of the features you’d find in today’s ideal Twitter app. That said, Twitterrific 5’s customizable timeline view (I use the light theme with Proxima Nova) is enough to makes me frequently return to it when I’m casually browsing or want to tweet something. But I can’t get rid of Tweetbot, not yet at least.

Twitterrific 5 is available on the App Store for an introductory price of $2.99 before it goes up to $4.99.

Felix is a Refreshingly Elegant Client for App .net