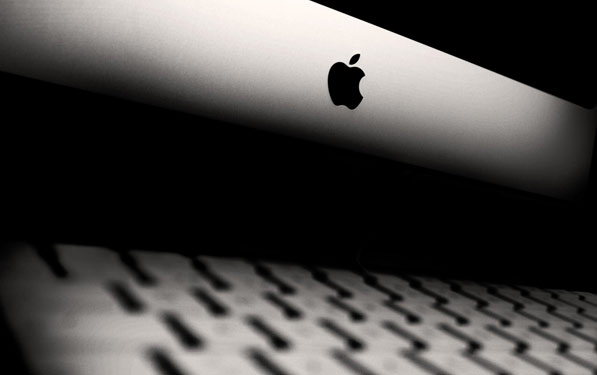 By Milind Alvares on 5th January '10 in Goodies, Mac

[tweetmeme] It’s wallpaper time! What better way to change your desktop than to magically replace the majority of its pixels. The Mac has so far shipped with some really good wallpapers, and Snow Leopard’s Aurora is just a timeless work of art that you can never tire of. Well, tire of in the long run, but you do need some change in between. While some prefer to have a picture of a city, or some loved ones, I can’t resist layering on ambient wallpapers that don’t really mean anything, but are beautiful by themselves.

These will fit in great with your desktop.

Your first stop to an Aurora replacement. And it comes with an Apple. And, if you don’t like the Apple, there’s a version without it included in the package. These designers are just too kind! Big bear hug to artist =Lemex.

Another one of my favourites which I come back to so often, AppleTV-esque features the same pleasing hues of blue and purple, and its lack of any distinct shape make it perfect for covering your desktop without any distractions. It’s also great for screenshots!

Straight out of the Hubble telescope (well after minimal post-processing), these spacey images look great on the desktop. Pictured below is the modified version which has been ‘Snow Leopardised’. I still can’t choose between the two.

While I’m not sure about the name for this wallpaper, it’s certainly a soothing bokeh, with very blurry shapes.

Wasn’t quite confident about including this one, but even with its slightly distracting shape, I still find myself using this every now and then.

On the Wings of a Dream

It just doesn’t get crazier than this. Sure he was inspired by science fiction, but the imagination that it must take to produce such depth, is nothing short of amazing. And not once does it ever get too distracting to be taken off the desktop. Kudos to JoeJesus, the artist.

Completely minimal, almost too simple, artist Mickka has managed to capture the two most perfect colours and mix them together. Really stunning work.

Electrifying, the work of Javier Ocasio a.k.a, -kol.

Another masterpiece by Ocasio, with colours very similar to Aurora. There’s a version without the planets as well, although I’m not sure it’s quite a good fit on a desktop.

Worthy successor to the bokeh by -kol.

While Ethereal looks dreamy as it is, I prefer to dump it into Pixelmator, twist the hues to a deep purple, and then paste it on my desktop.

And lastly, if you’re just feeling a different colour, you can always just go with the Snow Leopard Server Edition of the Aurora wallpaper, which comes in a cool blue.

Agreed, I went over the limit of 10. What was I to do? They’re all so irresistible!

[Header image, a wallpaper, but possibly an impractical one, is “iMac wallpaper” by Morillas]