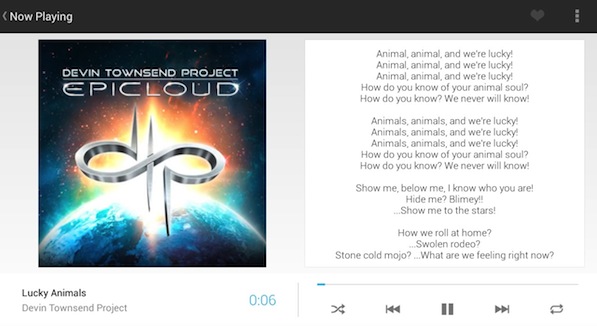 By Beautiful Pixels on 26th May '13 in Platter

As everyone is getting ready and equally excited for what Apple is going to announce at the WWDC '13 keynote scheduled in just over two weeks from now, we thought it would be a good idea to point our readers towards this site. Arrival.io is a beautiful website that lists all current Apple products along with the information such as 'days since last release' and 'days overdue for (next) release'. When you click on any of the products, you see the release dates for each generation of the product and the time between each release. It's a very neatly done website by @brandon_weiss and @thejurgy and you should check it out.

Ever found yourself in a scenario where you're trying to remember that obscure dish you once tried at that fancy Chinese restaurant but don't remember the name. Or that dish you once swore never to try again because it was that bad? Yummy :-9 (Yes, that's part of the name) helps you remember. It's a simple app that lets you add & maintain a list of restaurants and each restaurant has its own list of "thumbs up" & "thumbs down" dishes. There's also a highlight section that you can use to note down something amazing the restaurant offers. Thus, it becomes easy to know which places and dishes to avoid. You can share this data with your freinds, so you're not lost when next time someone asks you how that new restaurant around the block is. Yummy :-9 is $0.99 on the App Store.

CSS Tube Map is a personal project of freelance front-end web developer John Galantini. John has built an accurate replica of the London Underground Network using HTML5, CSS3 and a little bit of jQuery, with no images at all. I had fun browsing through the various station names of the network. It's a very brilliantly executed project, which John says took close to 120 hours to build.

Slonce is a clock app for iPhone. It's a weirdly interesting clock app that splits the day into vertical sections on the screen. The time is denoted by a single horizontal line between the current hours. The line continues to fill from the left to the right as the seconds in each minute progress. Based on your location, Slonce also denotes the sunrise and sunset timings as well as the dark and daylight times of the day. Slonce uses the concept of Dawn of which there are 3 types (I had no idea) — Civil Dawn, Nautical Dawn & Astronomical Dawn. It's an interesting concept and is available on the App Store for just $0.99.

We’d like to thank our sponsors Pixelmator for sponsoring our RSS feed this week.

Cloudee by the folks behind Boxee released on iOS back in July. It is a great tool to upload and share your videos with close friends and family. The best part is that it lets people view your uploaded videos on almost any device. The Android app just released and it looks amazing. The app has a modern Android look that doesn't just use the native Holo elements in the name of good design. Cloudee is a joy to use and it is great to see it out on Android finally. Cloudee is available for free on Google Play and is currently not compatible with tablets.

Android apps have had a bad rep for a while because of their horrible looks in many cases. When it comes to music apps on Android, PowerAmp is the most popular one and even that without a theme looks pretty horrible. Now Playing by Jack Underwood is a breath of fresh air. It has great animations and looks awesome on phones and tablets. The light theme in particular is brilliant. Now Playing automatically fetches lyrics to the song being played and even artist images from Last.fm. Now Playing is available as a 5 day trial for free and the unlocker can be purchased for $2 on Google Play.

Quotato is a brilliantly simple and elegant app to collect your quotes. Most apps for Quotes include way too much stuff instead of focussing on quick entry which is essential for capturing the right quote at the right time. Quotato is almost everything you will need an quote collecting app. The app launches with a big + that lets you quickly capture a quote and enter the name of the person who said it. The app has three main sections. The main quick entry section, the browse quotes section and the detail quote view. The detail quote view slides up in one of our favourite animations first seen in National Parks. Even the swipe to delete has a nice and subtle animation. Quotato only lacks in the absence of a backup method right now. It is available for Free on the App Store.

Know a website, app or something else that would look great on next week’s Platter? Let us know!

Wiselist is an Innovative Task Manager for iPhone