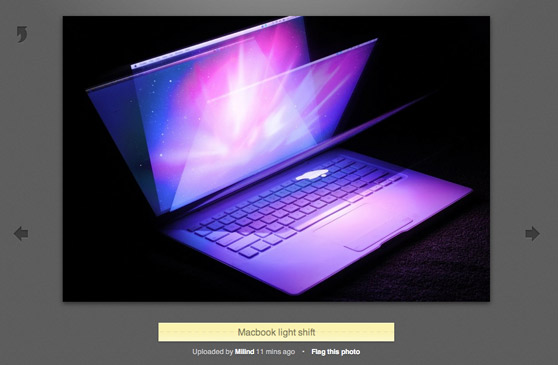 By Milind Alvares on 9th March '10 in Web

Divvyshot — something fresh for your pictures

The only reason I heard about Divvyshot was because of the MacBook Air bribe controversy over at TechCrunch. Turns out, at least one good thing came out of that story. Divvyshot is a social photo client, that tries to capture what people want to do with photographs.

With everyone owning digital cameras nowadays, be it a dSLR, point-and-shoot, or even a high resolution cam on a cellphone, pictures of a single event get scattered across many individuals’ albums and libraries. What’s the best way to bring them together? Divvyshot bases its workflow around ‘Events’. You create events, and add pictures to it. Send the link to your friends, and they can add pictures to it as well.

The beauty of Divvyshot starts with gorgeous pixels. At least from a nerd’s point of view, the full UI is composed out of digital noise, dark gradients, and monotone hues. And it’s not just icons and logos. Even the instructions take over this subdued look, giving focus to your content—colourful pictures. The other ‘beauty’ aspect of Divvyshot, is the way it feels. It’s a fairly complex web app, featuring slick animations, live meta-data editing, and it’s mostly built out of HTML and CSS (the uploader does use Flash though). You can instantly switch between viewing the event by activity, by contributor, or all of the pictures in a single grid. Divvyshot has some great features, most significant of which is the ability to import any Flickr set. I could go on, but this is no place for product reviews.

My only concern is, that Divvyshot is not welcoming enough for non-techie users—which should be Divvyshot’s target audience. I don’t know why, but history has shown that dark content on white backgrounds is the way to go for non-techies. Other niggles would be its single photo page is kind of bare, it doesn’t have an iPhone optimised UI, and its managerial features are pitiful; among other little complaints.

Perhaps I’m wrong and it will catch on, perhaps it won’t; I can’t comment on that. What I can say is that it’s a great looking web application, designed by Michael Yuan. And while I’m not going to switch to using it instead of Flickr just yet (it’s got a lot of ground to cover), you can’t help but sign up for a free account. If you’d just like to view an album to get a feel for the UI, you can check out mine.

Ambilight for video tag—prepare to cry.