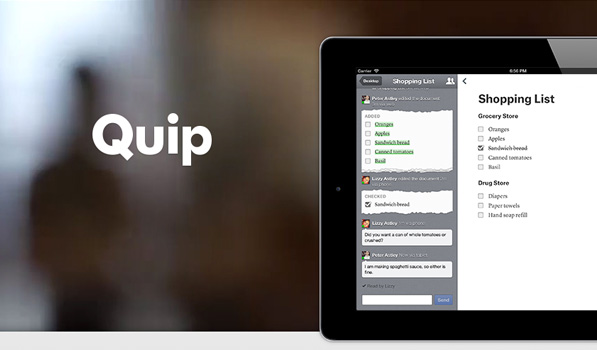 Quip Is a Modern, Collaborative Word Processor and More

Quip’s claim to fame is its creator, Bret Taylor. He’s best known co-creating Google Maps and later for manning the role of CTO in Facebook. So when he stepped down from that role and Quip came out almost exactly a year later, it was bound to be noticed.

Quip is a new age word processor and it is available on a variety of platforms — there’s an iPhone and iPad version, an online version accessible via a web browser and even a limited preview app on Android is also up for grabs to the early adopters. The iPad and web browser version look exactly the same, while UI on the iPhone is optimised for the smaller screen size. First thing you have to do when you open Quip is register using your email address. If the email address is a Google Account, then voila, just punch in your password and you’re authenticated. Quip has an uncanny resemblance to Apple’s iWork for iCloud suite — the linen texture, the way documents are shown as large thumbnails. But one thing that’s definitely unlike iCloud is the speed — the web version of Quip is extremely swift. Speedy transitions throughout the UI make you forget that you’re using a web app.

Logging into Quip shows you an activity menu to the left. Next to it is what can be best described as a file manager. You can organise documents into folders, colour-code them. The Activity Menu chronologically lists changes that collaborators have made to each document. Clicking on them reveals a full-blown changelog at the center, with a chatbox at the bottom to interact. They call a change in the Document as a ‘Diff’; showing portions of the document that have been edited by striking out the old in red and highlighting the change in green. Next to the changelog is the document itself. The best part — Quip is completely usable offline, and will update the changes once your phone or tablet gets back online. Offline mode in collaboration suites is usually tricky; Google Drive for instance will not allow you to create or edit anything when you’re offline.

The fonts used in Quip are beautiful and very easy on the eye. Thus, I wouldn’t complain about the fact that you can’t change them. Quip isn’t just a word processor. Other than paragraphs of formatted text and images, you can also add checklists and tables too. You can also @mention someone in the document or even add a link to another document in Quip. You can invite other people into a document via email or even phone. But unfortunately, phone invites didn’t seem to work with Vodafone or Airtel operator connections we tried here in India. There are means to restrict access to certain documents by keeping them in a private folder and then only inviting certain members.

In many ways, Quip isn’t a full-fledged alternative to your office productivity suite. There are things that Quip does wonderfully, but it’s not like it is feature-filled. For example, you cannot rotate an uploaded image or add basic formulas to tables. Lastly, there isn’t a way to export a document as an editable .doc or .pages file, just a PDF. But if you and your team are looking for a beautiful content collaboration suite, then Quip does have many special features that are built to impress. You can download Quip on iPhone and iPad for free from here, and to access the web browser version just head to quip.com. You can download the Android preview app here.

Invoices On Your iPhone