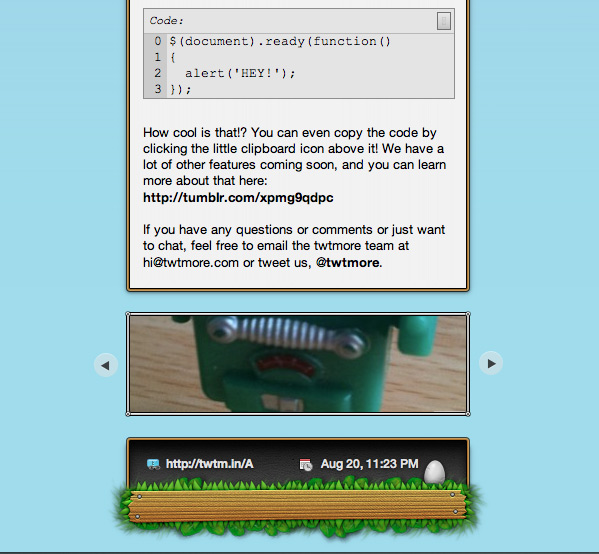 How many times have you been reprimanded for sending out a tweet using Twitlonger? If I’m following you, probably every time you do so. I hope there’s someone like me following you, or Twitter would just turn into a series of tweet longer messages. *shudders, even thinking about it*

Turns out there are at least some people in this world who care about good design, or care to eradicate bad design, rather. Westin Lohne and company created a brand new service, ‘twtmore‘, for sharing longer than 140 character twitter messages — one that doesn’t suck. Not only does it not suck, it’s quite beautiful. And not only is it beautiful, it’s even functional. When Lohne initially talked about twtmore, I figured it would be a Twitlonger that’s better looking — not a difficult task given the turd in question. But today they sent out their first public tweet, and we have something that incorporates some really useful features to go with it. For instance, if you share a ‘twitter photo’ from a service like Img.ly or Twitpic (hopefully the former is supported), it’ll automatically show up in the media box below. You can even embed code, which would be awesome for those crowd-sourced troubleshooting sessions.

Just one thing: It’s not public yet. They’re still working with developers to integrate this into twitter apps (I hope all of them do), so that might take a while to materialise. It’s also not feature complete, say the developers.

Does twtmore existence mean it’s okay to send out tweets longer than 140 characters? I hope not. If anything close to that happens, Lohne has assured me they’ll pull the plug on twtmore (okay he didn’t, but they should). I mean, how do you explain using long-tweet service for a 150 character tweet that’s written that way out of pure laziness? I believe that partly it’s these twitter clients who encourage it, making it so easy to just tweet a longer message than going back to edit it. But only partly, because the imbecile would have probably found a way anyway.

But there are times when a long tweet makes sense. Those rare occasions when you just need to get a point across that’s just not possible with 140 characters. You know, say you bitched about someone, and they found out and took it to heart, then you want to write a long explanantion stating it was just a joke? Or maybe you want to give a detailed explanation on why Twitlonger sucks? Or perhaps you need to explain why there exists a YouTube video of you in a dress? You can’t explain that in 140 characters, you need more (although that YouTube video will probably be unexplainable).

And when that day comes, and the service is in full swing, I pray you will use twtmore. May twtmore be the death of Twitlonger. Please.

UPDATE: I’ve got a couple of folks asking me why I’m recommending the use of twtmore. I don’t. Don’t use either of these services. They’re both evil, and I’d rather not see any of these in my timeline. Just that if I had to choose between the two evils, it’d be twtmore.