By Preshit Deorukhkar on 4th November '14 in iPad

At its iPad event held last month, Apple announced the mighty powerful iPad Air 2 to the world. One of the apps that Apple used to demo its raw processing power was Pixelmator for iPad. Pixelmator for Mac is already a stunning & powerful image editor app that has continued to evolve with newer underlying technologies and features with every major release. Pixelmator for iPad’s unveiling came as a surprise to almost everyone and what a pleasant surprise it was. I’ve been toying with the app over the last few days and it is one of the most amazing apps that I’ve used on my iPad.

Pixelmator for iPad is a gorgeous, lovingly crafted image editor app that lets you get creative right on your iPad. You can begin with a blank canvas, work with existing images or shoot one from the camera, use documents from your iCloud Drive or choose from one of the many gorgeous Templates available in the app. Pixelmator feels like a natural fit on iPad. The developers have done a remarkable job planning, crafting and polishing its feature set and if you’ve used the Mac app, you’ll find a whole lot of features that are also available in the iPad version. 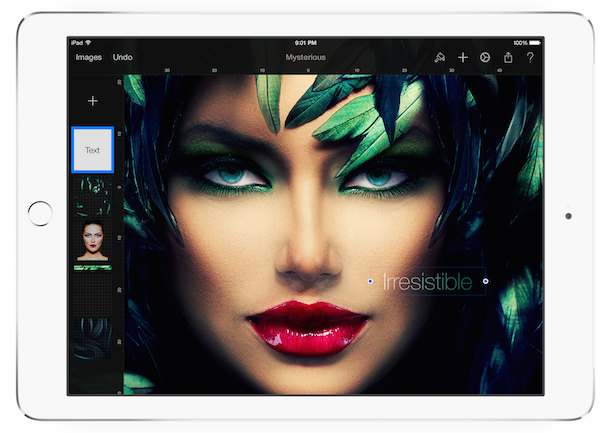 In spite of a powerful set of features, navigating through the app is still extremely easy. You’ve got 6 main ‘Tools’ to choose from, inside which there are a plethora of options that you can choose to get your creativity flowing. Paint and Erase includes drawing tools like Pencil, Crayon, Marker, Ink, Paintbrush, Spray, Smudge and Eraser. Retouch includes touchup tools like Repair, Lighten, Darken, Smudge, Sharpen, Soften, Fix Red-Eyes, Saturate & Desaturate. Adjust Colors lets you play with and tweak the colors in your image using sliders. Add Effects includes effects like Blur, Noise, Light Leaks, etc. Select and Crop tools are also available. You can add shapes, text, additional images to your composition using layers very easily and maintain control over everything you are doing in the app. There are grids & rulers available and moving objects is very natural. Pixelmator for iPad also lets you open and save images of type PSD, JPEG, PNG, PDF and other popular formats. You can even share your work to other apps or social networks like Twitter, Facebook or Flickr.

Pixelmator for iPad is a truly remarkable app that takes full advantage of the powerful technologies offered by iPad and iOS. There is a tremendous amount of work that has gone into this release and only when you start using the app do you realize what an amazing app this is. Pixelmator feels like an app that would sit perfectly next to iPhone & iMovie, Apple’s photo & video apps for iOS. In fact, the app UI and its website do feel like they were designed by someone at Apple. I highly recommend you get Pixelmator for iPad from the App Store, it’s a steal at just $4.99.