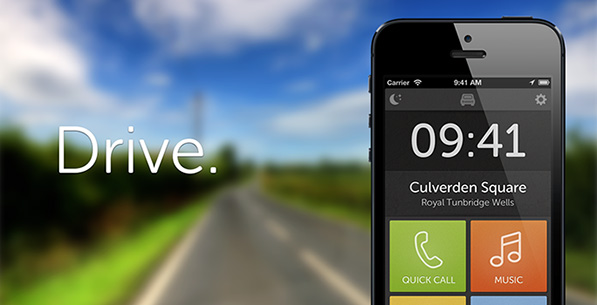 By Preshit Deorukhkar on 20th October '12 in iPhone

A Dollop of Yummy Pixels for When You Drive

Using your phone while driving is never easy. Well, using your phone while driving is not recommended, but there are times when you have to carry out certain actions and it seems like a mammoth task to hit tiny buttons on the screen. It could be a quick message to your wife saying you’d be reaching in 15 minutes or just a simple “I’ve reached, good night.” to your parents. A lot of car owners have Windshield or Dashboard docks for mounting their iPhones, either to navigate or just to make it easy for single-handed use. Drive is an app that makes common operations easily accessible, elegantly and downright simple.

Drive is a simple iPhone app by the fine folks at Create Digital Media that’s been designed to reduce the number of taps it takes to perform commonly used actions for Calls, Texts, Music and Maps. The app uses big, colored square buttons on the screen labeled with pretty glyphs so it’s easier to use when a majority of your attention is on the road. It lets you set up your favorite contacts for calls and recipients for Texts so that they’re just a few taps away. This saves you the hassle of launching the Phone/Messages app, tapping their name from a long list of contacts and then going ahead with the call. A single tap also opens an integrated map view within the app so you know exactly (well, not so much with Apple Maps in iOS 6) where you’re going. There’s also easy access to Music, giving you gesture based controls for play/pause/next/previous and volume instead of little control buttons.

The UI looks scrumptious with its fine coat of pixels, almost appearing as if 4 stickers were stuck on the screen. It has an elegant polish to it, which managed to bowl me over when I saw a preview on their site but looks even better on the Retina display. There’s no overuse of gradients or flashy colors, everything just looks right. The app also displays a clock and the name of the location you’re currently at readily on the screen. There’s a tiny clock icon at the top left of the screen that when tapped, shows a fullscreen digital clock. But it’s easy to miss that this little icon itself is dynamic, showing you the current hands of the clock. Driving through the night? You can enable the night mode from the Settings screen, which also shows you a nifty GPS strength indicator.

The current version of the app doesn’t let you add recipients who use their email addresses for iMessage, but the developers are working on update that will allow that and bring some new features as well. That said, this is still a pretty solid 1.0 release of the app and their first non-client app. At just $0.99 on the App Store, it’s pretty awesome app to have on your iPhone if you drive around in a car. And check out their website too, quite gorgeous and responsive.