By Preshit Deorukhkar on 2nd February '16 in Mac

Speedster is a native Mac app for testing your internet speed. Sure, there are quite a few popular websites out there for speed tests, but they’re all cluttered with ads and the experience offered by them is less than stellar. A majority of those sites also rely on Flash for their speed tests, so you either need to use Google Chrome or have Flash installed on your system.

Speedster prides itself on being a native utility built for OS X. It has been developed by developer Reda Lemeden, who’s previously brought us another network utility for Mac — IPinator. Speedster uses a 100% native UI and a beautiful one at that. There are no ads built into the app, so your experience is just as it should be. It runs in a tiny window on your desktop and is able to run the test on its own. You can test the speed of your network with a single click and the results can be shared using OS X’s native share menu. 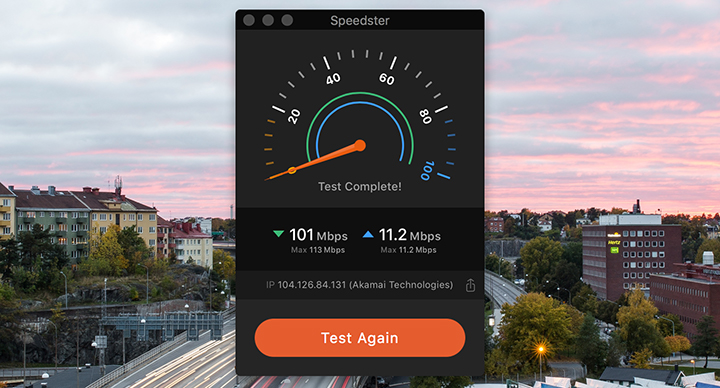 Speedster is available Free on the Mac App Store but you only get 3 tests per day. There’s a $3.99 IAP to remove this daily limit. Features like a Light theme, test logs with graphs, data export and test accuracy settings are on the roadmap according to the developer.

Update — May 17th, 2016: Speedster today has been updated to Version 2.0, and with it, the app as we have known it is dead. With today’s release, Speedster no longer offers any FREE tests. It is now merely a client app for the SpeedOf.Me speed testing service, and requires you to use your own API keys for it to work. That is, you have to sign up for a paid API plan starting at $4.99 a month to run any speed tests.

Here’s what the developer has to say about this change:

The free version of Speedster had a good run, but I can no longer support it due to high API costs and a stream of support tickets about things I do not control such as test accuracy etc.

Speedster 2.0 is a transparent client for the SpeedOfMe API. You can subscribe to one of their monthly plans and use your API key on the app. Consumable test packs will remain as a secondary option until further notice.

Existing Hero (unlimited tests) customers are still able to use and restore their in-app purchase.

Please check out the FAQ for more details: https://speedsterapp.com/faq

It’s sad to see Speedster turn into this, but it also speaks a lot about the disadvantages of relying upon 3rd party APIs and also what indie developers have to deal with today.

Inquire (Formerly Curiosity) — Discover the World Around You