By Mikhail Madnani on 4th July '14 in Android

Android has come a really long way since version 4.0. 4.0 was a step in the right direction and Google eventually released design guidelines for the OS. 4.1 was an amazing release and we saw more and more (unfortunately not as many as I had hoped) apps making use of the new HOLO design language and brilliant features. Project Butter made newer devices actually feel smooth to use and not everything scrolled like crap. Apps like Press and Pocket Casts for Android are still some of the best apps available on any platform. After 4.1, nothing really changed design wise until 4.4. 4.2 had way too many issues. I really hope Android L is a 5.0 release and not a 4.5 one. I’m tired of the faux solution to OEMs not being able to push updates on time causing Google to do point releases. This just makes it seem like other devices aren’t too far behind when it comes to software updates. However, the state of the update system where some variants of even Nexus devices get heavily delayed updates is not for this post. This is all about design.

Google I/O 2014 was all about Android. There were no new Nexus devices announced or launched and the new design language in 5.0 was the focus. I got to spend some time with Android L (developer preview) on a Nexus 5 after having read through the Material Design documents and am really impressed. Material Design extends across all screen sizes and devices. The changes are great and there is very little wrong with this bold new direction. Material Design treats layouts like multiple sheets of paper. Two sheets of paper are joined by a seam and they move together. They call this Paper Craft. One of my favourite bits from the design document is Responsive Interaction. It has been implemented brilliantly in the stock apps and the overflow scroll indicator actually responds to dragging across the screen.

I’m going to focus on how the stock OS has improved in the developer preview for Android L in this post. I even spoke to a few of my favourite developers and designers about their thoughts on Google’s new direction with Android. 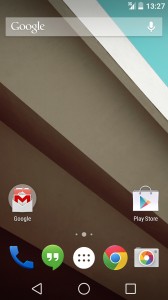 The homescreen on Android L (Henceforth L) looks almost the same as the one on KitKat. One notable change is the removal of the subtle gradient on the status bar and the soft buttons that were present on the devices. Google never used this gradient in their promo images and its removal for devices is a welcome change. The button that invokes the app drawer has also been changed to a solid white button instead of a slightly translucent one. The soft navigation keys at the bottom have been changed for the first time since Android 4.0 and are now a Triangle, Circle and Square respectively. 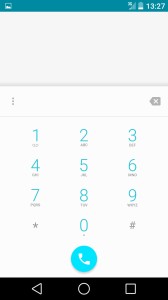 The L dialer is probably my least favourite stock app right now. I despise the nearly turquoise blue used for the call button. It just looks plain ugly. The status bar is coloured here and the overall look of the navigation bars and status bar have been borrowed from HTC’s Sense 6. HTC has made beautiful looking flagship phones in the last 2 years and with Sense 6, they had the best looking Android skin as well. 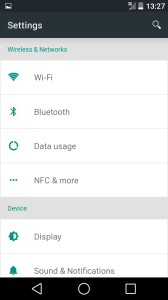 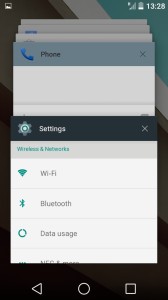 Multitasking now looks like the tab switcher in Chrome on mobile and Google now treats individual tabs in Chrome as a separate app while multitasking to give you a better experience. There still is no close all button unfortunately. Animations while scrolling through open apps are smooth like they should be and windows just float into place. The implementation is really nice overall. 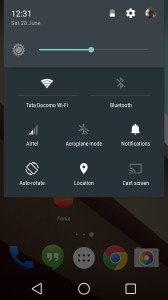 The notification center with quick settings has been given the biggest overhaul in L. Right from the lockscreen, notifications are treated as cards (similar to the Google Now lockscreen widget) and the quick settings can be accessed by pulling down further as opposed to the absolutely unintuitive two finger swipe down earlier releases had. The entire view has a new look and it feels a lot better to use. The clear all button is missing in this release for some reason.

There’s a lot to love in L and Material Design. Google really outdid themselves (and probably everyone else) design wise. It is awesome to see them pay this much attention to the user experience and looks of the most widely used mobile operating system. I’m looking forward to updates on the L preview.

I spoke to Russell Ivanovic from Shifty Jelly who was present at I/O this year, Marc Edwards from Bjango, and Jay Ohms of TwentyFive Squares about I/O 2014 and here’s what they had to say:

Hey, I’m not really a designer but my thoughts are simple: Google has done the impossible and out-designed Apple on Mobile. Their design is cleaner, more elegant and does things like z-index far better than Apple. It’s delightful to use and how everything responds to your touch makes iOS 7’s flat design feel too flat and hard to form a mental model of. You have to see it in person to really appreciate it. The effects look over the top when viewed in examples, but on the device itself they are fluid, very subtle and overall a huge improvement on anything that has come before it, from both Google, Apple and Microsoft. And at this I/O we’ve seen something we’ve never seen from Google before: a unified front for their design and products. Talking to engineers here it’s clear that since Andy Rubin left, just as with Forstall teams are now working together a lot more.

Material seems very cohesive and thoughtful. I think it will serve Google’s platforms well over the coming years.

It’s a small thing, but I like how Google has evolved the Android status bar, and how they’re using it as a draggable window title bar on desktops. Giving designers exact layering hierarchy and shadow sizes is great, too.

I can’t wait to try it on an actual device, to see if it lives up to my expectations. At first glance it seems like a home run though.

I’ve had a lingering sense of uneasiness about the future of Android design, recently. Most areas of the platform have been vastly improved over the past 2 years, but there was still a lack of a holistic vision from Google. Just put the KitKat Settings app next to the recently updated Google+ app, and you can see what I’m talking about. With Material Design, I don’t feel uneasy anymore – in fact, this is the most excited I’ve ever been as an Android developer. In one fell swoop, Google has exceeded my expectations and delivered something that I was beginning to question whether they were capable of.

I think it’s telling that the first section (after the introduction) on the Material Design site is Animation. And that’s not because it’s sorted alphabetically, either. Google’s finally taking animation seriously, which is historically one of the most difficult areas of design on Android. The tools just weren’t available before. And animating elements between screens wasn’t even possible under normal circumstances.

I am particularly excited to start playing with surface reactions and z-depth (with shadows/layers). I think these two things, combined with animation, will have some of the most user-visible changes to the platform. Apps are going to feel more alive in a way that was never easy or possible, before. Google has gone way beyond the aesthetics, and changed the paradigm of what a “view” is to developers – that’s exciting!

I haven’t started using the SDK yet, and it’s going to take awhile to wrap my head around everything that was announced, but I’m extremely impressed with the new design language. The best part is I know I’ll be making apps that are fundamentally better to use than before.

All things considered, I/O 2014 was great for developers and designers in general. I just hope more Android app developers use these guidelines in their apps. The focus on design and user experience shows you how much Google has changed since introducing Android. I remain cautiously optimistic about Android apps now. The platform finally has a concrete design base.

Human Activity in Cities Around the World