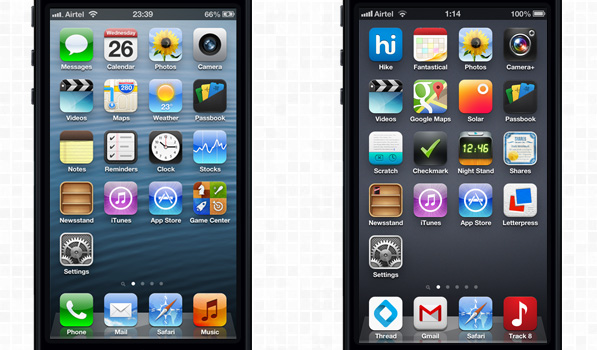 By Beautiful Pixels on 26th December '12 in iPad, iPhone

As a part of our ‘Best of 2012‘ series to end of this year, we’ve already shown you our picks for Best App Icons and the Best UI Animations so far. We thought today would be a good day to feature some excellent alternative apps or replacements to the stock/default apps that Apple offers for iOS. We’re sure many of our readers would’ve either gifted or received an iOS device this holiday season, so this list will hopefully help you find a better app that fits your needs the best.

We should note that unlike Android or OS X, iOS doesn’t allow setting a 3rd party app as a system default so it is impossible to completely stay independent of the stock apps. So while the apps on the list below are great alternatives, they work along with the default apps. Here’s our list, starting from the top-left of the Homescreen.

We love using iMessage, but the Messages app on iOS isn’t that much fun to use. Hike on the other hand while unable to replace your Messages app allows you to message anyone and looks great. We have spoken praise for Hike’s iOS and Android apps already. It can definitely replace WhatsApp (We wish they would update their terrible apps on every platform) and work in parallel with the Messages app on iOS. Hike is available for free on the App Store.

You’d think we’d be tired of talking about Fantastical for iPhone but we want you to replace that boring Calendar app on your homescreen with this beautifully functional calendar that makes your life much easier. It acts as a smart skin for your calendar that understands your language and lets you get things done in as few taps as possible. Its natural language processing is amazing. Flexibits have bowled us over with Fantastical on Mac and the iPhone version of Fantastical is available on the App Store for $3.99.

There’s no doubt that the iPhone makes one of the best pocket cameras today. The last two releases of the iPhone take exceptional photos already, and is easily one of the most popular camera around. For most people, the combination of the default Camera app + Instagram would do just fine. But for the slightly more adventurous ones, there are tons of powerful camera apps on the App Store. But none comes close to the feature-list and popularity of Camera+. The app is currently on sale at $0.99 on the App Store.

After the shitstorm surrounding Apple Maps in iOS 6, Google finally came out with their own app that brought the powerful, feature-rich and familiar maps experience back to iOS. With the App now on the App Store, Google can release frequent app updates as well. Google Maps for iOS now has live traffic updates, turn-by-turn navigation and of course, the gigantic amount of actual data. If you have an iOS device, there’s no reason why you shouldn’t download this. It’s Free on the App Store.

While the App Store has tons of great weather apps, Solar is our pick to replace the stock weather app on your iPhone. It is gesture driven with stunning looks. It even vibrates if there’s a thunderstorm in the forecast as you fast forward time by sliding up. Solar is unique and functional with its simple interface. It is available on the App Store for $1.99, but is yet to receive it’s ‘iPhone 5’ screen size update.

The default notes app on iOS is a complete dud. Sure, it was recently updated but it is still far from the powerful feature packed 3rd-party apps on the App Store — our favorite being Scratch by the folks at Karbon. It’s spiffy and fast, has a lovely UI and works exceptionally well. It offers Markdown support and an enhanced keyboard, and multiple sharing options as well. At $2.99 on the App Store, it’s easily a much better replacement to the default notes app on iOS.

Checkmark is awesome. It is our goto app for location based reminders. It can even remind you about stuff after a certain time after you have arrived at a location. Checkmark also has time based reminders that can be scheduled or recurring. Its only drawback is that it is an iPhone only app. We’re huge fans of Due as well. Due is by far our favourite reminders and timers app. It works brilliantly and actually makes us get stuff done. This post probably would have been delayed without Due. With its auto snooze, Mac app and natural language processing, Due makes you more productive on your iPhone. Due is available for $4.99 as a universal app and Checkmark is available for $4.99 on the App Store.

Night Stand HD 2 is by far the most stunning & feature-rich clock app on the App Store. The folks at Sourcebits have done a bang up job with v2 of the app. With this major update, Night Stand HD 2 brings Game Center integration to the app, letting you score points and unlock features in the app. It also introduces the all new Polar Clock to the app, which looks wonderful on the iPad. The other clocks in the app are downright gorgeous and we couldn’t recommend this app enough. Night Stand HD 2 is Free on the App Store.

We’ve already featured Shares here on Beautiful Pixels, so you probably already have this app. Right? For the ones that don’t, Shares is a lovely little app by Sam Soffes, more popularly known for his other app — Cheddar. Shares has a gorgeous UI and makes it very easy to track your stock portfolio. Instead of just looking at how a company is doing on the market, you can add how many shares you own and and what price you originally bought ’em. This way, Shares will tell you exactly how much you’ve gained or lost. It has nice bold numbers and a pleasing UI. It also features a neat icon to go along with the app’s UI. What more can you ask for? What’s that? Oh, yes. It’s Free on the App Store.

On our iPhones, the Contacts app is neatly filed away in a folder called ‘Meh’, along with other default apps like Stocks, Weather, Compass, Passbook, etc. While you probably use you Contacts quite a few times in a day, the fact that you can access it via the ‘Phone’ app means it can stay safely filed away in there. But Thread Contact could soon change that. A relatively lesser known app, Thread Contact from Kiwi developers OiGO brings a refreshing, minimal and almost Holo-like UI to the App Store. It has its own unique UI style that looks absolutely wonderful. Not only does it integrate with your local contacts, but it also uses your Facebook and Twitter logins from iOS to display those contacts in the app. You can enable/disable these services on the fly. There’s an integrated dialer too, but the call is placed via the Phone app, which is really an iOS limitation. Our only complaint is that the tab bar is too crowded at the bottom and that sounds would’ve been a nice touch to the app. Thread Contact is just $0.99 on the App Store.

The default Mail.app on iOS has mostly stayed ignored for a long time now. While it has received minor feature updates, it still remains the same boring app that it once was. When Sparrow arrived for iOS, it won over most of the market even though it lacked push notifications. Sparrow for iOS had a refreshing UI, a good feature-set but most of all, it worked great with Gmail. Unfortunately, Google themselves bought the small team behind Sparrow and killed the app. Gmail’s own iOS app, at version 1.0, was just a native wrapper around what was essentially a web app. However, with 2.0, Gmail has brought a solid & stable app to the App Store with a suave UI and some lovely animations. With this release, it now works as a perfect replacement to the Mail.app. It’s Free on the App Store.

We love listening to music on our iOS device but the stock music app just doesn’t cut it anymore. There have been a number of great apps this year that aim to be your goto music player on iOS. Our app of choice here is none other than Track 8 by Ender Labs. We spoke about how much we love it when it released and it has been refined since then with tons of new features. It now not only supports the iPhone 5 but also has portrait mode on the iPad. The app is full of Metro goodness and it looks plain awesome. Our favourite feature is AirPlay Mirroring in the app that lets you view a slideshow of the artist whose song is being currently played. Track 8 is a universal app and is available on the App Store for $1.99.

Many apps try and implement gestures for the sake of doing so. Rechner is a simple gesture based calculator that aims to simplify your basic calculations. It looks amazing and has a few subtle (and one annoying) in app sounds as well. There’s a guide to help you when you launch the app but if you ever need the guide again, you can tap the info button on the top left. Rechner is great for basic calculations and it has been updated for the iPhone 5 as well. It is available on the App Store for $0.99. If you need a Universal app or an app with scientific calculator functionality, opt for Calcbot instead. However, Tapbots haven’t updated the app for the iPhone 5 yet.

Apple released a dedicated podcasts app for iOS users after the functionality was removed from the iTunes app. The app has been a hit or miss with most people. It takes too long to add podcast subscriptions within the app and the sync barely works. Instacast has been the goto podcast app for most people for a long time. While it has been criticized for many things after being released as a new paid app with v3, Instacast 3 is our pick for the best podcast app on iOS. It is the best looking podcast app and with the latest update, Instacast sync works perfectly with your iOS devices. It also has push notifications for new episodes and individual podcast settings along with sleep timer functionality. Instacast 3 is available on the App Store as a universal app for $4.99 and if you listen to podcasts, look no further.

We’re not really sure why you’d want to use the Compass app on iOS, but Simply North is a much better app than the default one. It looks stunning on the Retina display and is now $1.99 on the App Store.

If you haven’t already figured it out, the masthead image up there is a before/after pic of our iPhones. We also decided to update the wallpaper from the boring one that ships with iOS 6 to our favorite wallpaper by Hector Simpson. You can go ahead and show us your new homescreens via Homescreen.me and if you think we’ve left out something, let us know via Twitter or App.net.