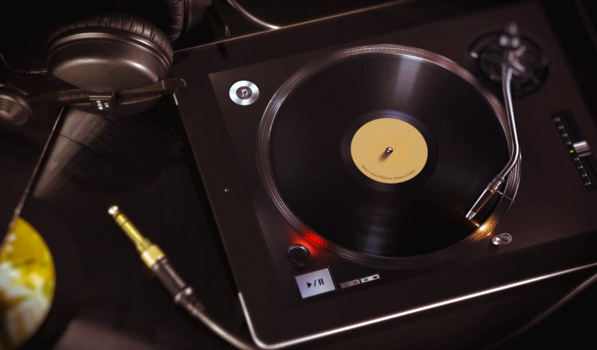 By Preshit Deorukhkar on 13th December '12 in iPad

Ramotion, previously known for the Pick’n’Roll app for Dribbble, have just released TurnPlay for iPad. And the app is, in my opinion, the most amazingly detailed audio player app for iPad I have ever seen.

If you’ve seen Ramotion’s work in the past, you’ll know that they go that extra mile with their efforts in adding detailing to their UI, but they just hit the ball out of the park with TurnPlay. You are presented with a turntable UI that almost exactly feels like a real turntable. I have spent a considerable amount of time learning on and playing with a Technics 1200 in the past, so playing with TurnPlay is amazingly nostalgic and delightful at the same time. When you tap the button at the top left, a wooden shelf that holds all your vinyls slides down. This makes use of big, gorgeous artwork from your library and looks great. You can either tap the play button on each vinyl to directly load it onto the drive to start playing or manually slide the cover off and slide down the vinyl onto the player. I prefer the latter.

Hit the on/off switch location at the bottom right and it turns on, along with the red light indicating that it’s now on. There are realistic sounds assigned to each button press and interaction in the app, which blew my mind. Hit the play button below it and the vinyl starts spinning as expected. Once again, the dancing of the dots as the red light falls on the platter blew me away. As with the original hardware, there are tiny 33/45 switches at the bottom too. You can lift the arm and gently place it on the record for it to start playing. If you move the arm a little too in on the vinyl, the app shows you the timestamp where it will start playing from. You can manually push/pull the vinyl or even scratch to your liking. Similar to the original hardware, there’s a +/- 8 pitch control on the right, which again has been executed brilliantly. If the app runs out of the song on the vinyl, it keeps spinning the platter and you’ll hear the analog noise from the head rubbing against the grooves. The app is also smart enough to use your track’s artwork and places it in the center of the record. The overall UX of TurnPlay is mind-blowing.

I could go on and on about the detailing in this app, but it won’t mean anything till you actually experience it. Their promo video gives some idea of it.

TurnPlay will probably not replace your current music player on your iPad, but I’m certain it will replace your “favorite” music player. Bonus points if you’re used an actual turntable in the past. TurnPlay is available for just $0.99 on the App Store as a launch special price, after which it will be priced at $1.99.

Foldify Makes Coloring Paper on the iPad a Lot of Fun