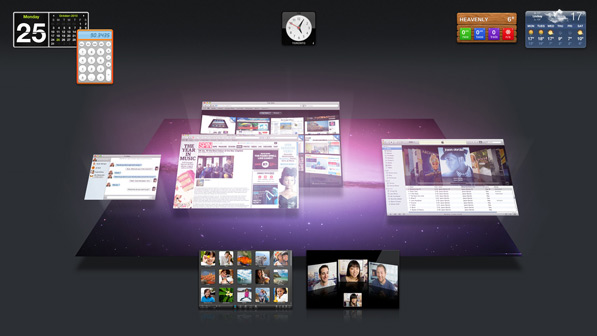 By Milind Alvares on 26th October '10 in Goodies, Mac

One of the biggest UI changes in Lion, is Mission Control. It certainly looks like a better Exposé; better not only in aesthetics, but also in productivity, I assume. But what if Apple had taken a more 3D approach to this whole thing?

Zach Forrester cooks up something in his Photoshop, and ends up with what you see above (he explains). One big change in this UI is that the widgets are live and active, unlike with Mission Control. After all, why not? You only need a couple of widgets these days, so why have a separate screen? First, I think Apple designs its UIs to scale from the smallest MacBook to the biggest Cinema Display. Widgets would look wrong on the MacBook Air screen. Second, Widgets take valuable resources to load, so unless you really need them, it’s best to keep them in the background.

The screenshot above looks nice. It glows with the dominant desktop picture colour, and would look fantastic on a 27-inch iMac. But it’s hard to believe Apple hasn’t mocked up UIs far more exotic than this one. It might look good in a single frame, but usability is a different matter. It would use a ton of resources to generate that view, would be slower in interaction, and the change in perspective every time you want to switch windows would be quite a visual irritant, I imagine. That’s why Windows has Flip3D and OS X does not.