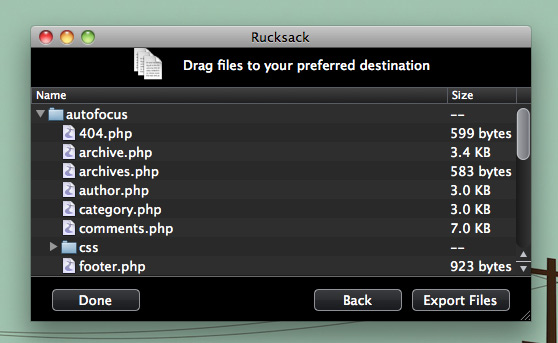 By Milind Alvares on 4th February '10 in Mac

Seems like developers have tasked themselves with creating new and interesting user interfaces for boring tasks. Unarchiving zips and rars is one common task for any computer user, and the built in app can only take you so far.

Rucksack is a simple and efficient unarchiver and compressor, built to replace its predecessor—iArchiver. It’s still in beta, but the user interface is definitely one something for the eye to appreciate. Right from the welcoming drop screen, to the rotating sunburst as you hover over the window, it’s all done to impress the user. It’s currently in beta, but so far has worked fine uncompressing archives as well as creating new ones. Only time and serious testing will tell whether it’s really a good unarchiver at its core. You may volunteer your time in the beta test, and register for a 10% discount when the app hits the market. If I could complain a little about the UI, either I’m losing sight or the welcome drop-screen’s arrow looks a little fuzzy, so perhaps Dietmar Kerschner should redraw it before its final release.

An elegant narrative of the Made by Sofa site redesign