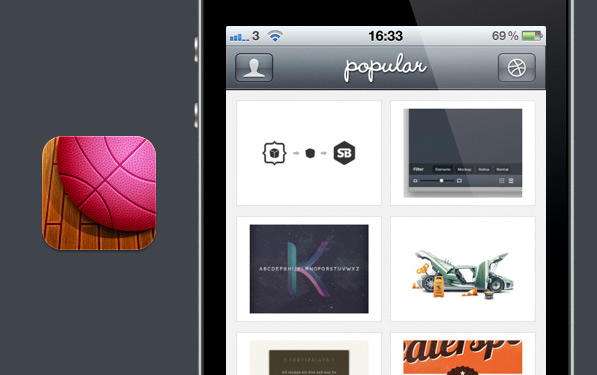 By Milind Alvares on 4th December '10 in iPhone

I don’t know what to make of native dribbble apps for the iPhone. To me dribbble is a ‘website’ than something that goes in an app. 95% of the time I land on dribbble is via a link on twitter or a google search. Moreover the dribbble api doesn’t allow any searching (yet), so you’re stuck with the four limited feeds. But that’s just me. Probably tons of people who want to dribbble it up every morning, on the go, and just before bedtime. And for that, we have our third iPhone dribbble app, Swish, designed by Mathieu White and developed by Joshua Tucker. It’s the prettiest of the lot.

White has added some sexy gloss to its UI, while leaving the rest to the content out of the dribbble API — absolutely stunning on a retina display. Unlike in Dunk where you have to view one shot at a time, Swish shows you a grid of shots to choose from. Choosing a shot will show you comments, views, and the ability to view a profile. In terms of appearances, the custom pixels, though few, are delicious. The vibrant icon itself makes it worth having the app on your homescreen.

But, when it comes to creating custom UI, designers must ensure that they behave predictably. This pop-over style is rarely seen on the iPhone, which usually known to bring up actions in a sheet. I won’t dispute that the pop-over is quite well suited to the purpose, but it needs to be done right. In Swish, the pop-over isn’t dismissed until you tap on the very button that triggered it, where as we’ve seen on the iPad, just tapping outside should dismiss it. Not just that. While tapping an empty spot will keep the pop-over active, tapping a thumbnail will trigger an event, where you had intended on dismissing the pop-over. It’s not the end of the world, and should probably just be filed as a bug, but I just wanted to point out how using custom UI can mess up the UX.

But other than that, Swish is a great client, and does well with whatever little the dribbble api throws at it. Costs $1.99 on the App Store.

Why Google Maps seem much more “Readable” than its Competitors

Pure Reader — Do your Google Reader experience a favour