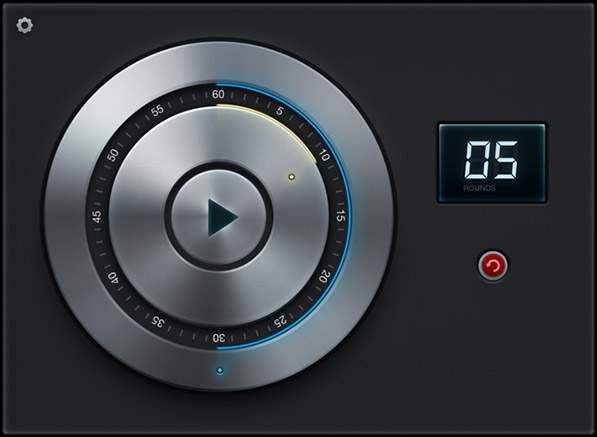 By Preshit Deorukhkar on 23rd January '13 in iPad, iPhone

There’s no shortage of timer apps on the App Store today, but when we come across an implementation as incredible as Timewheel, we can’t resists writing about it here on Beautiful Pixels. It’s not like we haven’t already featured many other timer apps here, but Timewheel deserves its own little mention here.

Timer is a stunning interval timer app for the iPad. There’s only one screen which features all the controls that you can play with. There are two concentric metal dials that take up most of the screen, along with a round count indicator and a reset button. The design of the metal dials is downright stunning. The texturing of the ‘stainless-steel’-ish material looks absolutely fantastic and the detailing on it, like minor scratches and abnormalities has also been taken care of. It looks almost realistic, like a huge door of a bank safe. There are subtle glowing lights inside and on each dial to denote the count. As you press the play button, an additional light turns on on the outside of the dials, which is a really nice touch.

The external dial denotes the timer count while the internal dial denotes the stop or interval count. Timewheel has some lovely interface sounds, which I’m sure Mikhail will love. You can either pre-set the number of rounds to countdown from, or you can go into an ‘unlimited’ mode by using the Manual mode in the settings.

Timewheel is one of the ‘One Thing Well’ apps available on the App Store. It’s a simple app with a stunning interface, but I’d love to see it work in the Portrait mode as well. It’s available Free on the App Store as an ad-enabled version & costs $1.99 to go Ad Free, but I never saw any ads in it during my usage.