Bear — An Exceptionally Elegant Notes App for iOS and Mac

Ah, Evernote… How the mighty have fallen. Once the automatic choice for everyone who wanted a digital repository, Evernote has fallen from grace since their new pricing strategy came into effect last year. One of the greatest advantages Evernote had was that although the Free tier (Evernote Basic) did not include all the bells and whistles of ‘Plus’ and ‘Premium’ tiers, it still allowed multi-platform sync on as many devices as you owned. That changed last year, with it being restricted to only two. I can’t help but feel this was a cynical move, since most people would have a phone, a tablet, and a PC, in order to utilize Evernote to its fullest potential. It thus become imperative to upgrade to ‘Plus’, at the very least, which would involve shelling out $3.99/month, or $34.99/year.

Evernote’s other main problem was feature bloat – in an effort to make Evernote a one-stop shop for all your productivity needs, the developers added a veritable Smörgåsbord of add-ons, such as business card scanning, PDF Annotation, OCR, chat features and even a presentation mode. The kicker was, there was no way to turn all this off, and go back to the blank vellum of a simple note-taking app. It drove most people away, including our Editor, even before the new pricing tiers were announced.

At this point, I’d like to make a confession – I was an Evernote Premium user for years. I have planned trips, used the service as a receipt repository, saved important PDFs and scans and even used Evernote as a shared shopping list. I loved the added features, and I would extract every ounce of use out of the service. What turned me away from the service was very simple – I found myself turning to Apple Notes every time I needed to quickly jot something down. Between my slowing iPhone 6, and Evernote’s ever increasing bloat, I began to fall out of love with the service. It was still my piggy-bank for ideas, but crucially, it was only so for my old ideas. I needed something new, with a feature set as close to Evernote’s as possible, but no added weight. Something like Bear.

Right away, the thing that strikes when you fire up the app for the first time is the elegance, a clarity of setting that feels like a breath of fresh air, when compared to Evernote’s clunky, chunky and overloaded interface. It’s everything I like about plain text editors, packed into a note-taking app. The transitions are smooth, the UI palette is customizable (more on this later), and the whole app just feels snappy and lightweight. In short, you find yourself wanting to type, and that’s what you need from a note-taking app, at the very least.

Aesthetically, Bear is absolutely gorgeous. The app has several themes, from the standard Red Graphite, to Charcoal and, my personal favourite, Gotham. Hello, Dark Mode paradise! The colour choices for each theme are very tasteful, and not even a single theme felt rushed. Each accent and highlight was carefully considered and chosen. Every tag, every heading, and all your content is easy to decipher, visually. 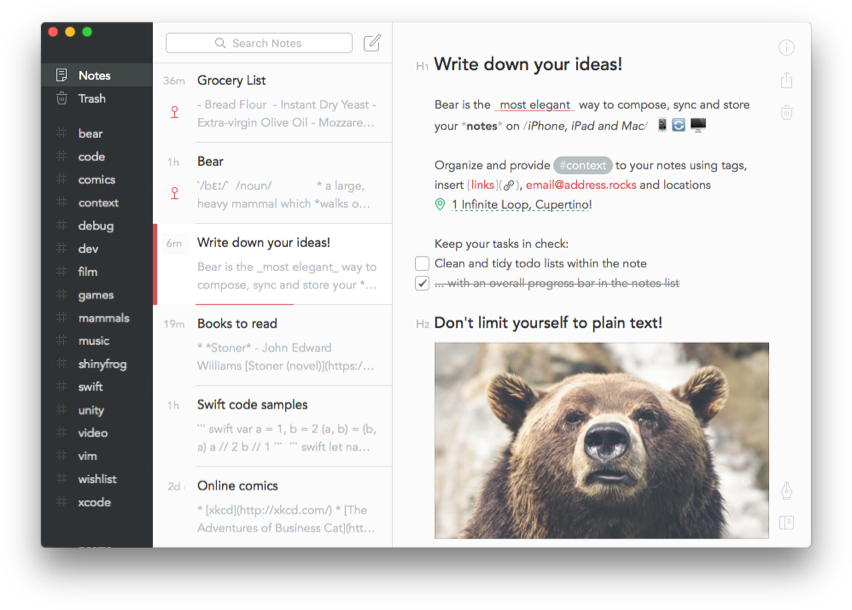 Speaking of typing, here’s another reason why Bear’s developer should be praised to the skies – Rich Markdown is baked right in. What this means is, veteran Markdown users feel right at home, and can make full use of the standard Markdown syntax, by toggling the ‘Markdown Compatibility Mode’ in the app’s settings, or they can use the app’s own slightly modified version of Markdown. Meanwhile, newbies also have access to the myriad features of Markdown, without having to learn the syntax first. Every Markdown feature can be found on a touchbar located just above the keyboard in the iOS apps, so you can just tap on them to format your text. This formatting is visible in real time, so if you were to enclose some text in asterisks, it would actually get bolded right in front of your eyes, instead of only being visible in the preview or the exported final document. It’s a beautiful touch, and I can imagine that both Markdown enthusiasts and novies would be thanking Shiny Frog, the developer, with all their heart.

Bear also has support for inline images, documents and links. Sadly, unlike Apple Notes, there are no rich previews of links yet. Hopefully, Shiny Frog implements the funtionality soon. There’s really nothing quite like saving a link to, say, a tweet, in your notes app of choice, and finding a rich preview waiting for you when you open it, to add some context. Sure, loading the link in your browser would provide the same context (and in the case of full websites, provide even more context), but having a preview ready when you open your note is invaluable, and needs to be experienced to believe it.

For organization, Bear uses tags, instead of Evernote’s Notebooks and Stacks, and Apple Notes’ Folders. It’s a lot faster to classify a note under ‘Transaction’ or ‘Trip’ by typing #transaction or #trip in Bear. If, like me, you use Folders for Macro organization, and Tags for more fine-grained organization, Bear offers a workaround, by allowing you to nest tags. For example, If you file a transaction-based note under the tag ‘Bank’ or ‘Credit Card’, and you’d like them to show up under a parent tag ‘Transaction’, simply tag your notes as #transaction/bank and #transaction/credit card. The app sidebar now has a parent tag ‘Transaction’, and, when expanded, it’ll show you the ’Bank’ and ‘Credit Card’ tags. It’s genius, it’s quick, and it’s why Bear is such a fantastically well thought-out app. For now, however, it only allows you one layer of obfuscation. Both I, and my ‘Trips’ tag, are hoping more levels of nesting will be enabled soon.

Sync, too, is fantastic. Make a change on any note, and seemingly magically, it is made to all versions of that note on all your devices. Only in the similarly fantastic Ulysses have I seen such seamless and invisible syncing. It is quick, it is reliable, and it doesn’t require any input from your end. It uses Apple’s CloudKit, and is robust and well supported, without creating, for instance, yet another Dropbox dependency.

Bear also has the usual features you’d expect from a fully-featured note-taking app — You can import your notes from other apps (most notably, pun very much intended, from Evernote), you can export your notes to a variety of formats (PDFs, HTML, Markdown, etc.), a Share Sheet extension that allows Prepending and Appending to existing notes, pinning notes (to make them easier to find), lots of automation options, through the magic of URL schemes, the works. It’s the note app to end all note apps, as far as I’m concerned, because it packs in everything you’d expect as a former Evernote user, and yet remains as light and quick to sync as Apple Notes.

Bear isn’t without its shortcomings, however. Unlike Evernote and Notes, there’s no collaboration, so there goes my shared shopping list. I’ve also already mentioned the lack of rich previews. One issue, which was very well covered by Federico Viticci over at MacStories, is that Bear doesn’t have Conflict Resolution. According to Federico,

“…if you append content from the Bear extension to the same note from multiple devices, when you'll open the app you'll likely be presented with a conflicted copy of that note.”

To paraphrase slightly, this means that, every time you prepend or append something to a note using the share extension, you’ll need to open the app, to initiate a sync. Only then will the change appear on another device, without creating a conflicted copy. As Federico puts it, Apple Notes just does this better.

Finally, although I would hesitate to add this as a shortcoming, a lot of you might – most of Bear’s features are hidden behind a Pro Subscription. Being a Pro unlocks multi-device sync, themes and exporting — all the things I consider essential, and so might you. Pro subscriptions are extremely reasonably priced though, at $1.49/month or $14.99/year.

I have been using Bear full-time since its launch, and I heartily recommend it to anyone who needs a note-taking app. With its amazing feature set, polished design and sustainable business model, I’m certain I’ll be using Bear for years to come. Even if note-taking apps aren’t for you, try the app anyway. You never know, you might just start finding a use for it in your daily life. Bear has assumed its rightful place on my iOS Homescreen, and my Mac’s dock, and it isn’t going anywhere for a long time. (Don’t even think about it, Murphy!)

Bear is free to download on the App Store, and they also have a Mac Version.

Followio — A Lovely App to Track Your Followers [Updated]